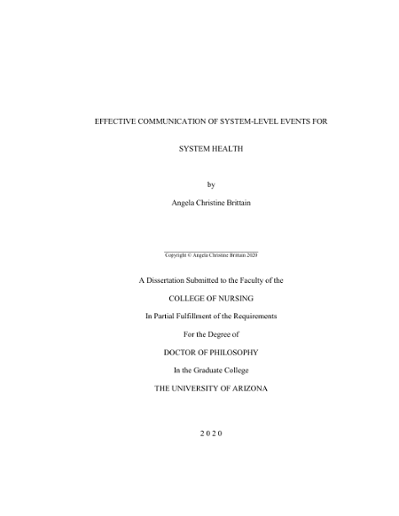 Millions of injuries and over 400,000 deaths occur yearly in the United States (US) from preventable errors (Classen, Griffin, & Berwick, 2017; James, 2013; Makary & Daniel, 2016). The cost of preventable errors has been estimated at roughly $20 billion per year and current statistics confirm that the US spends roughly double that of other high-income countries, despite comparable utilization rates (Papanicolas, Woskie, & Jha, 2018; Rodziewicz & Hipskind, 2019). Most mitigating efforts have been unsuccessfully applied at the bedside without regard for hospital organization complexity (Finn et al., 2018; James, 2013; Kobewka et al., 2017; Zhang et al., 2017). Given that hospitals represent complex systems with many interacting subsystems, an understanding of preventable errors as symptomology of underlying systemic factors is lacking (Begun, Zimmerman, & Dooley, 2003; Braithwaite, Wears, & Hollnagel, 2015; World Health Organization [WHO], 2009). The purpose of this research was to increase understanding of the perceptions of nurses and nursing leaders from magnet-designated and non-magnet-designated hospital organizations regarding what system-level events or circumstances may degrade hospital system health and compromise patient safety. This was underpinned by the Effective System-to-System Communication Framework, which was adapted from the Effective Nurse-to-Nurse Communication Framework and further informed by complexity theory (Capra & Luisi, 2014; Carrington, 2012a; Dekker, 2011; Karwowski, 2012). The sample was drawn magnet-designated and non-magnet designated hospitals in the US. Three staff nurses and three nursing leaders were recruited from magnet-designated hospitals and non-magnet designated hospitals for a total of 12 participants. Sampled participants were those whose work involves medical-surgical units or patients in their respective organizations. The interviews were transcribed verbatim and analyzed by thematic analysis, natural language processing, and the Goodwin statistic (Goodwin & Goodwin, 1985; LIWC.net, n.d.; Morse & Field, 1995).