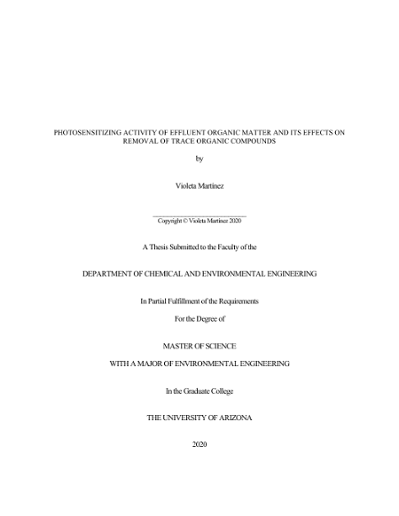 The continuous growth of global population is increasing the demand for potable water as well as the volume of wastewater generated worldwide, thus threatening water shortage and quality degradation of natural waters. To prevent water scarcity, water reuse has been proposed as a promising alternative. However, many of the chemicals used for industry, agriculture, medical treatment, veterinary and household activities can enter natural waters, disperse, and persist to a greater extent even though the wastewater generated by these processes is treated. Examples of potential contaminants in aquatic environments include trace organic compounds (TOrCs). These micropollutants are found in wastewater at concentrations of ng/L to μg/L. At these levels, a fraction of the contaminants entering the wastewater treatment plants is degraded, whereas some pass through and are dissolved in the effluent that is discharged to natural water bodies. After these residual TOrCs enter the environment, there are multiple routes for attenuation. One of them is the indirect photolysis of TOrCs via reaction with singlet oxygen (1O2). This compound is an oxidant that can be generated by photosensitization reactions in which a light-absorbing group of the chromophoric dissolved organic matter (CDOM) -so called photosensitizer- is excited by light that promotes the formation of the lowest excited electronic state of molecular oxygen dissolved in the water. Although 1O2 has been reported as an important factor for TOrCs degradation in sunlit natural waters, a complete characterization of the way that it is generated and the role of CDOM in the reaction mechanism is lacking. In this research, effluent organic matter (EfOM) is used as a CDOM source to test for TOrCs removals. Reclaimed water from the Agua Nueva Water Reclamation Facility (ANWRF) in Tucson, Arizona, was used for all the experiments. The residual organics in the water were first concentrated to accelerate the 1O2-generation. The concentration steps included ultra-filtration (UF) followed by reverse osmosis (RO). Both operations were carried out at the Water & Sustainable Technology Center (WEST Center) of Tucson, Arizona, using reclaimed water effluent from ANWRF. For the light source required to activate the photolytic reaction, UVA (300-400 nm) light or sunlight was used. Furfuryl alcohol (FFA) was used as target organic in all cases, and control experiments using NaN3 (1O2 quencher) and isopropanol (hydroxyl radical scavenger) were conducted. Results of the experimental assessment showed that 1O2 is the main species responsible for FFA removal and that the production of 1O2 decreases upon light irradiation of wastewater, although on a time scale longer than needed for FFA degradation. This effect, herein called photobleaching, might be due to degradation of the photosensitizers. A reaction mechanism was proposed for the FFA-photodegradation via 1O2 under UVA (300-400 nm) light and sunlight. Model and data indicate that the FFA-photodegradation follows first-order kinetics under the test conditions and that the concentration of 1O2 was on the order of ~10-14 M. In addition to FFA removal, total organic carbon (TOC), regionally integrated fluorescence, and total fluorescence (TF), as well as several TOrCs, were also diminished by extended UVA (300-400 nm) irradiation. The group of TOrCs that were tested for removal via reaction with 1O2 included acesulfame, atenolol, benzophenone, benzotriazole, carbamazepine, N,N-Diethyl-meta-toluamide (DEET), diclofenac, diphenhydramine, diltiazem, gemfibrozil, prednisone, propranolol, sucralose, sulfamethoxazole, tris(2-chlorosisopropyl) phosphate (TCPP), and trimethoprim. From this group, sucralose, prednisone, DEET, and TCPP were unaffected by the UVA (300-400 nm) light. The median removal for the others was higher than 0.75.