ATLAS probe for the study of galaxy evolution with 300,000,000 galaxy spectra 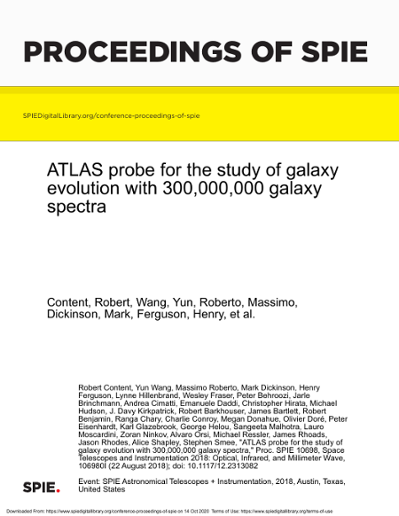 ATLAS (Astrophysics Telescope for Large Area Spectroscopy) Probe is a mission concept for a NASA probe-class space mission with primary science goal the definitive study of galaxy evolution through the capture of 300,000,000 galaxy spectra up to z=7. It is made of a 1.5-m Ritchey-Chretien telescope with a field of view of solid angle 0.4 deg(2). The wavelength range is at least 1 mu m to 4 mu m with a goal of 0.9 mu m to 5 mu m. Average resolution is 600 but with a possible trade-off to get 1000 at the longer wavelengths. The ATLAS Probe instrument is made of 4 identical spectrographs each using a Digital Micro-mirror Device (DMD) as a multi-object mask. It builds on the work done for the ESA SPACE and Phase-A EUCLID projects. Three-mirror fore-optics re-image each sub-field on its DMD which has 2048 x 1080 mirrors 13.6 mu m wide with 2 possible tilts, one sending light to the spectrograph, the other to a light dump. The ATLAS Probe spectrographs use prisms as dispersive elements because of their higher and more uniform transmission, their larger bandwidth, and the ability to control the resolution slope with the choice of glasses. Each spectrograph has 2 cameras. While the collimator is made of 4 mirrors, each camera is made of only one mirror which reduces the total number of optics. All mirrors are aspheric but with a relatively small P-V with respect to their best fit sphere making them easily manufacturable. For imaging, a simple mirror to replace the prism is not an option because the aberrations are globally corrected by the collimator and camera together which gives large aberrations when the mirror is inserted. An achromatic grism is used instead. There are many variations of the design that permit very different packaging of the optics. ATLAS Probe will enable ground-breaking science in all areas of astrophysics. It will (1) revolutionize galaxy evolution studies by tracing the relation between galaxies and dark matter from the local group to cosmic voids and filaments, from the epoch of reionization through the peak era of galaxy assembly; (2) open a new window into the dark universe by mapping the dark matter filaments to unveil the nature of the dark Universe using 3D weak lensing with spectroscopic redshifts, and obtaining definitive measurements of dark energy and modification of gravity using cosmic large-scale structure; (3) probe the Milky Way's dust-shrouded regions, reaching the far side of our Galaxy; and (4) characterize asteroids and other objects in the outer solar systems.