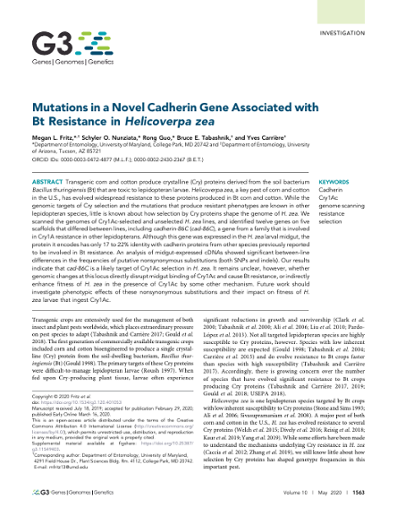 Copyright © 2020 Fritz et al. This is an open-access article distributed under the terms of the Creative Commons Attribution 4.0 International License (http://creativecommons.org/licenses/by/4.0/), which permits unrestricted use, distribution, and reproduction in any medium, provided the original work is properly cited.

Transgenic corn and cotton produce crystalline (Cry) proteins derived from the soil bacterium Bacillus thuringiensis (Bt) that are toxic to lepidopteran larvae. Helicoverpa zea, a key pest of corn and cotton in the U.S., has evolved widespread resistance to these proteins produced in Bt corn and cotton. While the genomic targets of Cry selection and the mutations that produce resistant phenotypes are known in other lepidopteran species, little is known about how selection by Cry proteins shape the genome of H. zea We scanned the genomes of Cry1Ac-selected and unselected H. zea lines, and identified twelve genes on five scaffolds that differed between lines, including cadherin-86C (cad-86C), a gene from a family that is involved in Cry1A resistance in other lepidopterans. Although this gene was expressed in the H. zea larval midgut, the protein it encodes has only 17 to 22% identity with cadherin proteins from other species previously reported to be involved in Bt resistance. An analysis of midgut-expressed cDNAs showed significant between-line differences in the frequencies of putative nonsynonymous substitutions (both SNPs and indels). Our results indicate that cad-86C is a likely target of Cry1Ac selection in H. zea It remains unclear, however, whether genomic changes at this locus directly disrupt midgut binding of Cry1Ac and cause Bt resistance, or indirectly enhance fitness of H. zea in the presence of Cry1Ac by some other mechanism. Future work should investigate phenotypic effects of these nonsynonymous substitutions and their impact on fitness of H. zea larvae that ingest Cry1Ac.

Except where otherwise noted, this item's license is described as Copyright © 2020 Fritz et al. This is an open-access article distributed under the terms of the Creative Commons Attribution 4.0 International License (http://creativecommons.org/licenses/by/4.0/), which permits unrestricted use, distribution, and reproduction in any medium, provided the original work is properly cited.