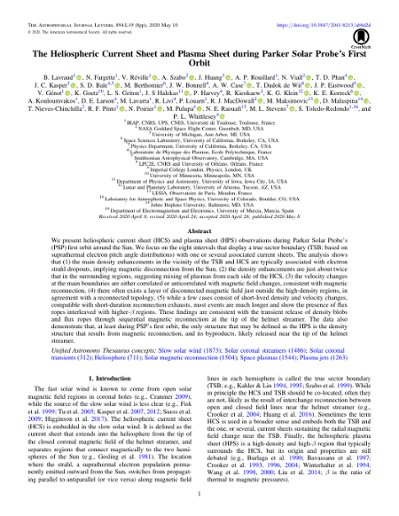 We present heliospheric current sheet (HCS) and plasma sheet (HPS) observations during Parker Solar Probe's (PSP) first orbit around the Sun. We focus on the eight intervals that display a true sector boundary (TSB; based on suprathermal electron pitch angle distributions) with one or several associated current sheets. The analysis shows that (1) the main density enhancements in the vicinity of the TSB and HCS are typically associated with electron strahl dropouts, implying magnetic disconnection from the Sun, (2) the density enhancements are just about twice that in the surrounding regions, suggesting mixing of plasmas from each side of the HCS, (3) the velocity changes at the main boundaries are either correlated or anticorrelated with magnetic field changes, consistent with magnetic reconnection, (4) there often exists a layer of disconnected magnetic field just outside the high-density regions, in agreement with a reconnected topology, (5) while a few cases consist of short-lived density and velocity changes, compatible with short-duration reconnection exhausts, most events are much longer and show the presence of flux ropes interleaved with higher-beta regions. These findings are consistent with the transient release of density blobs and flux ropes through sequential magnetic reconnection at the tip of the helmet streamer. The data also demonstrate that, at least during PSP's first orbit, the only structure that may be defined as the HPS is the density structure that results from magnetic reconnection, and its byproducts, likely released near the tip of the helmet streamer.