naat ?a hemkank'la maqlaqsyalank: Toward a Tribal Methodology in Language Research 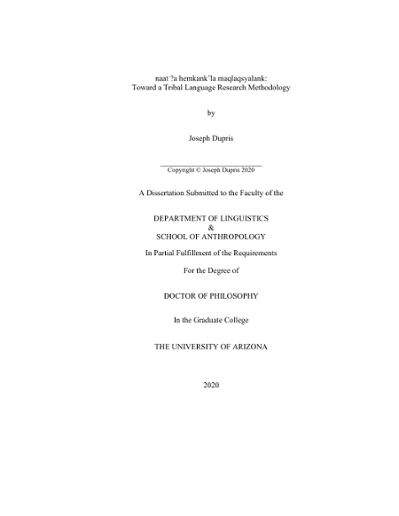 The historical diminishment and contemporary revitalization of indigenous languages are underwritten by universalizing discourses set into motion three thousand years ago in the Antiquarian Mediterranean. Tribes, which are immanent polities with inherent rights to govern and protect their lands and peoples, have historically been deemed to be a barrier to empire-building and colonization. The salient colonial response to tribal polity has been forced detribalization, or the disaggregation of indigenous polities into governable state subjects. The factors underwriting indigenous status and identity are not interchangeable, though they overlap significantly. This research disambiguates indigenous race and nation under a “tribal” label. Ultimately, this dissertation offers a tribal methodology for language research that recognizes and respects indigenous polities. The research project aligns multiyear collaboration by the Klamath Tribes and American Indian Language Development Institute with the Klamath Tribes’ long-term commitment to restore the languages of the Klamath, Modoc, and Yahooskin Paiute peoples. Tribal language research conducted with tribal community members informed and articulated principles for future tribally-based language research. Further, the research validated the portability of Where Are Your Keys? Techniques and assessed them as valuable and important for enhancing tribal community members’ language immersion experiences. The first chapter gives a brief political history of western linguistic inquiry, demonstrating language’s primary role in coloniality. Coloniality relies on language as a vital supplement to visions of empire in indigenous homelands. Language research, regimentation of linguistic elements, and evaluation of language speakers through the Middle Ages proved an effective means for usurpation of lands, minds and bodies from existing polities. Those practices proved foundational to praxes of empire in the Americas. Colonizers sought to consume and appropriate indigenous knowledges in synergy with state-sponsored violence and alienation of non-IndoEuropean language users in conjunction with existing racial, religious and class orders. At the end of the chapter, the purpose of tying language to political or racial status and concerns about ambiguations of identity and polity under “indigenous” labels in language science paradigms are examined. The second chapter argues for limiting indigenous labels to tribes and similar transnational political entities underlying colonial nations. This scholarly reframing of polity and identity in relation to land claims enables critical examination of political differences between citizens of indigenous polity and persons of Indigene heritage in the formation of the United States and Mexico. The territorialization of the states of Oregon and California importantly drew on indigenized notions of race, religion and class to privilege European-Indigene metissage, initiate genocide and decolonial revolution, and attempt to preclude Black-tribal association west of the continental divide. The third chapter examines the interplay of federal Indian policy, language research and race science in political actions aimed at detribalization in the United States. Language research was an important aspect of 19th century federal Indian policy. That research incorporated ideas about the relationship between race, citizenship and tribes in the mid-20th century, eventually motivating the federal termination policy, or the legislative erasure of tribes de jure. From Termination through Restoration and the present, the Klamath Tribes have mobilized transcommunal activities to assert nationhood and mitigate state subjugation in the face of socioeconomic siege and formal legislative erasure. The chapter provides focused attention to maqlaqsyals and its diminished use in response to modern racism and Klamath termination, incorporating community thoughts and efforts pertaining to language revitalization. The fourth chapter outlines a research paradigm that centers indigenous polities and suggests the methodological tenets of a tribal paradigm can mobilize language research in sustenance of the political integrity of indigenous nations. The components of a paradigmatic approach to research are discussed, emphasizing cooperative political action through tribal consultation and formal cooperative agreements. Next, insights and experiences are recounted in operationalizing a preliminary tribal research methodology, and methodological reframing based on pilot research carried out in 2016 and 2017 with Klamath tribal community members. Methodological insights gained from the 2018 Summer Language Intensive internship with Where Are Your Keys? (WAYK) and Aleutian Pribilof Island Association are presented with regard to their contribution to a prototype of tribal language research. The chapter concludes with information underwriting the present research project. The fifth chapter describes a study that was carried out with Klamath Tribes community members from December 2018 to August 2019 on the Klamath Reservation in Chiloquin, Oregon. It provides a detailed explanation of research design, methods, and interpretation of outcomes operationalizing the prototype research methodology described in chapter four. The research was carried out to better understand which members of the language community would be interested in participating in tribal language research and what their attitudes are towards maqlaqsyals language and restoration efforts, and to formally test the portability of Where Are Your Keys? Techniques to pedagogical components of tribal language research. The findings of the research are presented, with insights to better understand tribally-centered research. It is hoped that this project leaves the Klamath Tribes well-positioned to facilitate further language research reflective of tribal community guidance. Concluding thoughts are given in the final chapter.