Magnetic Field Kinks and Folds in the Solar Wind 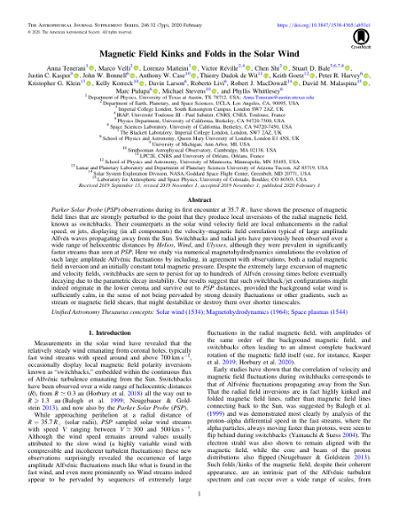 Parker Solar Probe (PSP) observations during its first encounter at 35.7 R-circle dot have shown the presence of magnetic field lines that are strongly perturbed to the point that they produce local inversions of the radial magnetic field, known as switchbacks. Their counterparts in the solar wind velocity field are local enhancements in the radial speed, or jets, displaying (in all components) the velocity-magnetic field correlation typical of large amplitude Alfven waves propagating away from the Sun. Switchbacks and radial jets have previously been observed over a wide range of heliocentric distances by Helios, Wind, and Ulysses, although they were prevalent in significantly faster streams than seen at PSP. Here we study via numerical magnetohydrodynamics simulations the evolution of such large amplitude Alfvenic fluctuations by including, in agreement with observations, both a radial magnetic field inversion and an initially constant total magnetic pressure. Despite the extremely large excursion of magnetic and velocity fields, switchbacks are seen to persist for up to hundreds of Alfven crossing times before eventually decaying due to the parametric decay instability. Our results suggest that such switchback/jet configurations might indeed originate in the lower corona and survive out to PSP distances, provided the background solar wind is sufficiently calm, in the sense of not being pervaded by strong density fluctuations or other gradients, such as stream or magnetic field shears, that might destabilize or destroy them over shorter timescales.