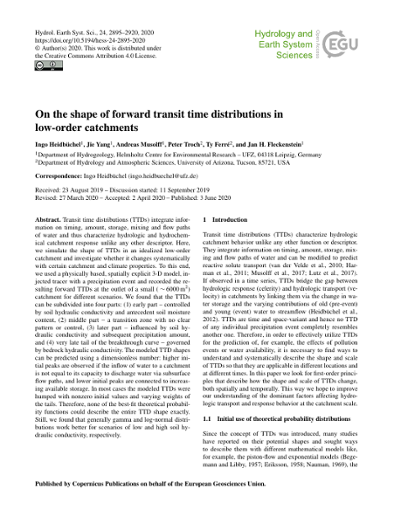 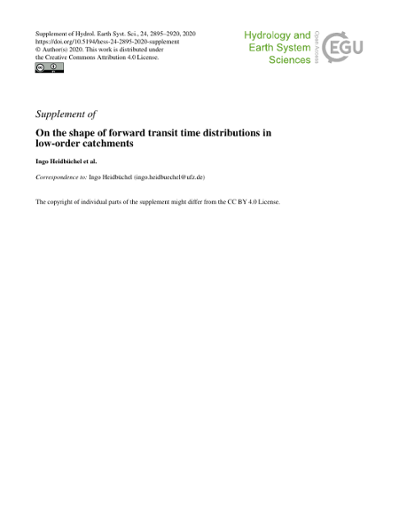 © Author(s) 2020. This work is distributed under the Creative Commons Attribution 4.0 License.

Transit time distributions (TTDs) integrate information on timing, amount, storage, mixing and flow paths of water and thus characterize hydrologic and hydrochemical catchment response unlike any other descriptor. Here, we simulate the shape of TTDs in an idealized low-order catchment and investigate whether it changes systematically with certain catchment and climate properties. To this end, we used a physically based, spatially explicit 3-D model, injected tracer with a precipitation event and recorded the resulting forward TTDs at the outlet of a small ( - 6000 m(2)) catchment for different scenarios. We found that the TTDs can be subdivided into four parts: (1) early part - controlled by soil hydraulic conductivity and antecedent soil moisture content, (2) middle part - a transition zone with no clear pattern or control, (3) later part - influenced by soil hydraulic conductivity and subsequent precipitation amount, and (4) very late tail of the breakthrough curve - governed by bedrock hydraulic conductivity. The modeled TTD shapes can be predicted using a dimensionless number: higher initial peaks are observed if the inflow of water to a catchment is not equal to its capacity to discharge water via subsurface flow paths, and lower initial peaks are connected to increasing available storage. In most cases the modeled TTDs were humped with nonzero initial values and varying weights of the tails. Therefore, none of the best-fit theoretical probability functions could describe the entire TTD shape exactly. Still, we found that generally gamma and log-normal distributions work better for scenarios of low and high soil hydraulic conductivity, respectively.

Except where otherwise noted, this item's license is described as © Author(s) 2020. This work is distributed under the Creative Commons Attribution 4.0 License.