Stratigraphic and provenance analysis of Triassic rock units between 28-29° S, northern Chile: implications on the tectonic and paleogeographic evolution of the southwestern margin of Gondwana 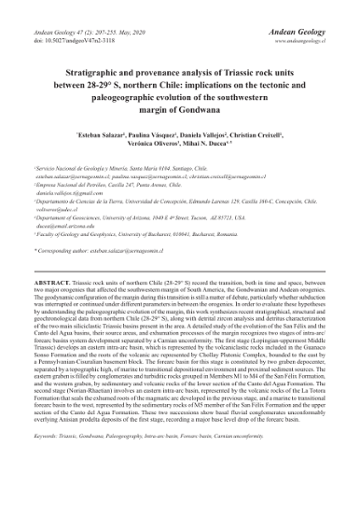 This work is licensed under a Creative Commons Attribution 3.0 License. Copyright is held by the author(s) or the publisher. If your intended use exceeds the permitted uses specified by the license, contact the publisher for more information.

Triassic rock units of northern Chile (28-29 degrees S) record the transition, both in time and space, between two major orogenies that affected the southwestern margin of South America, the Gondwanian and Andean orogenies. The geodynamic configuration of the margin during this transition is still a matter of debate, particularly whether subduction was interrupted or continued under different parameters in between the orogenies. In order to evaluate these hypotheses by understanding the paleogeographic evolution of the margin, this work synthesizes recent stratigraphical, structural and geochronological data from northern Chile (28-29 degrees S), along with detrital zircon analysis and detritus characterization of the two main siliciclastic Triassic basins present in the area. A detailed study of the evolution of the San Felix and the Canto del Agua basins, their source areas, and exhumation processes of the margin recognizes two stages of intra-arc/forearc basins system development separated by a Carnian unconformity. The first stage (Lopingian-uppermost Middle Triassic) develops an eastern intra-arc basin, which is represented by the volcaniclastic rocks included in the Guanaco Sonso Fonnation and the roots of the volcanic arc represented by Chollay Plutonic Complex, bounded to the east by a Pennsylvanian-Cisuralian basement block. The forearc basin for this stage is constituted by two graben depocenter, separated by a topographic high, of marine to transitional depositional environment and proximal sediment sources. The eastern graben is filled by conglomerates and turbiditic rocks grouped in Members M1 to M4 of the San Felix Formation, and the western graben, by sedimentary and volcanic rocks of the lower section of the Canto del Agua Formation. The second stage (Norian-Rhaetian) involves an eastern intra-arc basin, represented by the volcanic rocks of the La Totora Formation that seals the exhumed roots of the magmatic arc developed in the previous stage, and a marine to transitional forearc basin to the west, represented by the sedimentary rocks of M5 member of the San Felix Formation and the upper section of the Canto del Agua Formation. These two successions show basal fluvial conglomerates unconformably overlying Anisian prodelta deposits of the first stage, recording a major base level drop of the forearc basin.

Except where otherwise noted, this item's license is described as This work is licensed under a Creative Commons Attribution 3.0 License. Copyright is held by the author(s) or the publisher. If your intended use exceeds the permitted uses specified by the license, contact the publisher for more information.