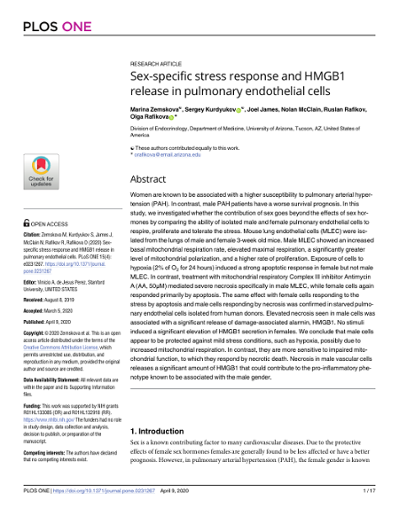 © 2020 Zemskova et al. This is an open access article distributed under the terms of the Creative Commons Attribution License, which permits unrestricted use, distribution, and reproduction in any medium, provided the original author and source are credited.

Women are known to be associated with a higher susceptibility to pulmonary arterial hypertension (PAH). In contrast, male PAH patients have a worse survival prognosis. In this study, we investigated whether the contribution of sex goes beyond the effects of sex hormones by comparing the ability of isolated male and female pulmonary endothelial cells to respire, proliferate and tolerate the stress. Mouse lung endothelial cells (MLEC) were isolated from the lungs of male and female 3-week old mice. Male MLEC showed an increased basal mitochondrial respiration rate, elevated maximal respiration, a significantly greater level of mitochondrial polarization, and a higher rate of proliferation. Exposure of cells to hypoxia (2% of O-2 for 24 hours) induced a strong apoptotic response in female but not male MLEC. In contrast, treatment with mitochondrial respiratory Complex III inhibitor Antimycin A (AA, 50 mu M) mediated severe necrosis specifically in male MLEC, while female cells again responded primarily by apoptosis. The same effect with female cells responding to the stress by apoptosis and male cells responding by necrosis was confirmed in starved pulmonary endothelial cells isolated from human donors. Elevated necrosis seen in male cells was associated with a significant release of damage-associated alarmin, HMGB1. No stimuli induced a significant elevation of HMGB1 secretion in females. We conclude that male cells appear to be protected against mild stress conditions, such as hypoxia, possibly due to increased mitochondrial respiration. In contrast, they are more sensitive to impaired mitochondrial function, to which they respond by necrotic death. Necrosis in male vascular cells releases a significant amount of HMGB1 that could contribute to the pro-inflammatory phenotype known to be associated with the male gender.