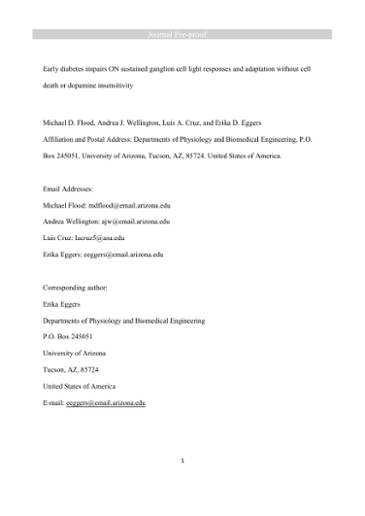 Retinal signaling under dark-adapted conditions is perturbed during early diabetes. Additionally, dopamine, the main neuromodulator of retinal light adaptation, is diminished in diabetic retinas. However, it is not known if this dopamine deficiency changes how the retina responds to increased light or dopamine. Here we determine whether light adaptation is impaired in the diabetic retina, and investigate potential mechanism(s) of impairment. Diabetes was induced in C57BL/6J male mice via 3 intraperitoneal injections of streptozotocin (75 mg/kg) and confirmed by blood glucose levels more than 200 mg/dL. After 6 weeks, whole-cell recordings of light-evoked and spontaneous inhibitory postsynaptic currents (IPSCs) or excitatory postsynaptic currents (EPSCs) were made from rod bipolar cells and ON sustained ganglion cells, respectively. Light responses were recorded before and after D1 receptor (D1R) activation (SKF-38393, 20 μM) or light adaptation (background of 950 photons·μm-2 ·s-1). Retinal whole mounts were stained for either tyrosine hydroxylase and activated caspase-3 or GAD65/67, GlyT1 and RBPMS and imaged. D1R activation and light adaptation both decreased inhibition, but the disinhibition was not different between control and diabetic rod bipolar cells. However, diabetic ganglion cell light-evoked EPSCs were increased in the dark and showed reduced light adaptation. No differences were found in light adaptation of spontaneous EPSC parameters, suggesting upstream changes. No changes in cell density were found for dopaminergic, glycinergic or GABAergic amacrine cells, or ganglion cells. Thus, in early diabetes, ON sustained ganglion cells receive excessive excitation under dark- and light-adapted conditions. Our results show that this is not attributable to loss in number or dopamine sensitivity of inhibitory amacrine cells or loss of dopaminergic amacrine cells.