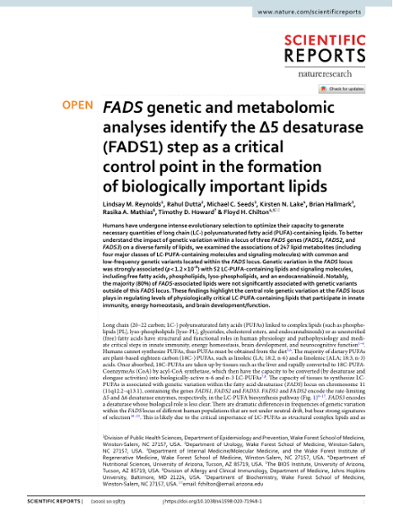 © The Author(s) 2020. This article is licensed under a Creative Commons Attribution 4.0 International License.

Humans have undergone intense evolutionary selection to optimize their capacity to generate necessary quantities of long chain (LC-) polyunsaturated fatty acid (PUFA)-containing lipids. To better understand the impact of genetic variation within a locus of three FADS genes (FADS1, FADS2, and FADS3) on a diverse family of lipids, we examined the associations of 247 lipid metabolites (including four major classes of LC-PUFA-containing molecules and signaling molecules) with common and low-frequency genetic variants located within the FADS locus. Genetic variation in the FADS locus was strongly associated (p < 1.2 × 10-8) with 52 LC-PUFA-containing lipids and signaling molecules, including free fatty acids, phospholipids, lyso-phospholipids, and an endocannabinoid. Notably, the majority (80%) of FADS-associated lipids were not significantly associated with genetic variants outside of this FADS locus. These findings highlight the central role genetic variation at the FADS locus plays in regulating levels of physiologically critical LC-PUFA-containing lipids that participate in innate immunity, energy homeostasis, and brain development/function.

Except where otherwise noted, this item's license is described as © The Author(s) 2020. This article is licensed under a Creative Commons Attribution 4.0 International License.