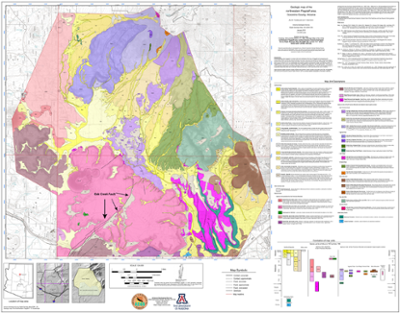 Surficial geology was mapped in an area north and northwest of the City of Flagstaff, encompassing the southwestern slopes of the San Francisco Peaks and areas at its base including Fort Valley, Observatory Mesa, portions of the Dry Lake Hills and Elden Mountain, and the northern portion of the City of Flagstaff. The mapping area covers a portion of six 7½‘ quadrangles: the southern portion of Humphrey’s Peak, the northern portion of Flagstaff West, and corners of Sunset Crater West, Flagstaff East, Bellemont, and Wing Mountain. The purpose of this geologic mapping was to address geologic hazards in the Flagstaff area, a region with abundant known or suspected Quaternary faults and moderate historical seismicity, and an area that has a risk for wildfires. High-resolution digital elevation models (DEMs) derived from LiDAR, recently acquired by the City of Flagstaff in 2013 and by the Coconino County Public Works in 2016, provided detailed topographic information. Bedrock geology that was previously mapped (Wolfe et al., 1987; Holm, 1988) and in a GIS geodatabase format (Bard et al., 2015) was incorporated into this map, however bedrock boundaries were adjusted to better reflect the detailed topography and to show surficial geology. The delineation of Holocene and Pleistocene surficial geologic units was informed by previous work in the area (Updike, 1977; Miller et al., 1995; Joyal, 2004; Neff et al., 2011; Stempniewicz, 2014; Holm, 2019), and geochronological dates of two andesites, Qa1 and Qa2, were updated based on work by Karátson et al. (2010). The bedrock portion of the correlation diagram is from Wolfe et al. (1987). A report with detailed information accompanies this map.