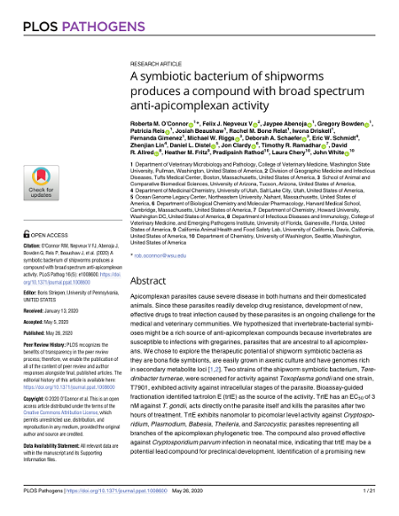 Copyright © 2020 O’Connor et al. This is an open access article distributed under the terms of the Creative Commons Attribution License.

Apicomplexan parasites cause severe disease in both humans and their domesticated animals. Since these parasites readily develop drug resistance, development of new, effective drugs to treat infection caused by these parasites is an ongoing challenge for the medical and veterinary communities. We hypothesized that invertebrate-bacterial symbioses might be a rich source of anti-apicomplexan compounds because invertebrates are susceptible to infections with gregarines, parasites that are ancestral to all apicomplexans. We chose to explore the therapeutic potential of shipworm symbiotic bacteria as they are bona fide symbionts, are easily grown in axenic culture and have genomes rich in secondary metabolite loci [1,2]. Two strains of the shipworm symbiotic bacterium, Teredinibacter turnerae, were screened for activity against Toxoplasma gondii and one strain, T7901, exhibited activity against intracellular stages of the parasite. Bioassay-guided fractionation identified tartrolon E (trtE) as the source of the activity. TrtE has an EC50 of 3 nM against T. gondii, acts directly on the parasite itself and kills the parasites after two hours of treatment. TrtE exhibits nanomolar to picomolar level activity against Cryptosporidium, Plasmodium, Babesia, Theileria, and Sarcocystis; parasites representing all branches of the apicomplexan phylogenetic tree. The compound also proved effective against Cryptosporidium parvum infection in neonatal mice, indicating that trtE may be a potential lead compound for preclinical development. Identification of a promising new compound after such limited screening strongly encourages further mining of invertebrate symbionts for new anti-parasitic therapeutics. Author summary Apicomplexans are intracellular protozoan parasites that cause significant disease in humans and the livestock we rely on for food. Because these parasites easily develop drug resistance, new drugs are always needed. To identify new anti-apicomplexan drugs, we investigated the compounds produced by symbiotic bacteria of shipworms, marine mollusks that burrow into and eat wood. We screened shipworm symbiotic bacteria for anti-parasitic activity and identified a compound, tartrolon E, with potent, rapid, highly selective and irreversible activity against parasites representing all branches of the apicomplexan tree. This compound was also highly effective in neonatal mice against infection with the intestinal apicomplexan parasite, Cryptosporidium. This study describes the first pan-anti-apicomplexan compound and unveils an unexplored source of anti-parasitic compounds.

Except where otherwise noted, this item's license is described as Copyright © 2020 O’Connor et al. This is an open access article distributed under the terms of the Creative Commons Attribution License.