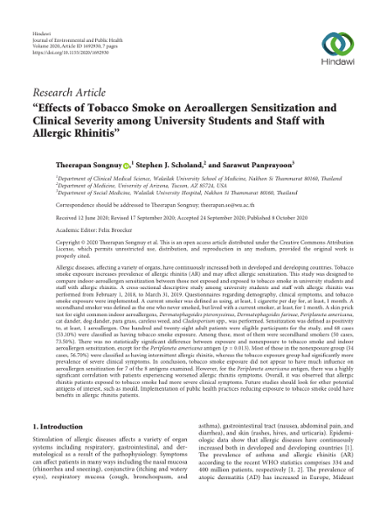 JOURNAL OF ENVIRONMENTAL AND PUBLIC HEALTH

Copyright © 2020 Theerapan Songnuy et al. This is an open access article distributed under the Creative Commons Attribution License, which permits unrestricted use, distribution, and reproduction in any medium, provided the original work is properly cited.

Allergic diseases, affecting a variety of organs, have continuously increased both in developed and developing countries. Tobacco smoke exposure increases prevalence of allergic rhinitis (AR) and may affect allergic sensitization. This study was designed to compare indoor-aeroallergen sensitization between those not exposed and exposed to tobacco smoke in university students and staff with allergic rhinitis. A cross-sectional descriptive study among university students and staff with allergic rhinitis was performed from February 1, 2018, to March 31, 2019. Questionnaires regarding demography, clinical symptoms, and tobacco smoke exposure were implemented. A current smoker was defined as using, at least, 1 cigarette per day for, at least, 1 month. A secondhand smoker was defined as the one who never smoked, but lived with a current smoker, at least, for 1 month. A skin prick test for eight common indoor aeroallergens, Dermatophagoides pteronyssinus, Dermatophagoides farinae, Periplaneta americana, cat dander, dog dander, para grass, careless weed, and Cladosporium spp., was performed. Sensitization was defined as positivity to, at least, 1 aeroallergen. One hundred and twenty-eight adult patients were eligible participants for the study, and 68 cases (53.10%) were classified as having tobacco smoke exposure. Among these, most of them were secondhand smokers (50 cases, 73.50%). There was no statistically significant difference between exposure and nonexposure to tobacco smoke and indoor aeroallergen sensitization, except for the Periplaneta americana antigen (p=0.013). Most of those in the nonexposure group (34 cases, 56.70%) were classified as having intermittent allergic rhinitis, whereas the tobacco exposure group had significantly more prevalence of severe clinical symptoms. In conclusion, tobacco smoke exposure did not appear to have much influence on aeroallergen sensitization for 7 of the 8 antigens examined. However, for the Periplaneta americana antigen, there was a highly significant correlation with patients experiencing worsened allergic rhinitis symptoms. Overall, it was observed that allergic rhinitis patients exposed to tobacco smoke had more severe clinical symptoms. Future studies should look for other potential antigens of interest, such as mould. Implementation of public health practices reducing exposure to tobacco smoke could have benefits in allergic rhinitis patients.

Except where otherwise noted, this item's license is described as Copyright © 2020 Theerapan Songnuy et al. This is an open access article distributed under the Creative Commons Attribution License, which permits unrestricted use, distribution, and reproduction in any medium, provided the original work is properly cited.