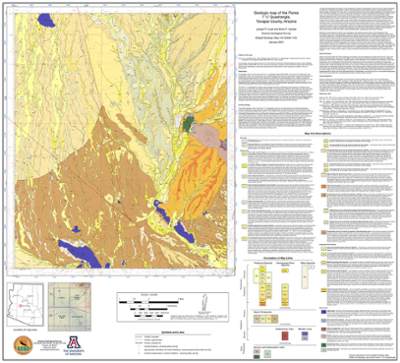 This geologic map is one of a series of four 7 1⁄2’ quadrangle maps (AZGS DGM-131 through 134; Wickenburg, Sam Powell Peak, Flores, and Vulture Peak) in the Wickenburg area. New surficial mapping was conducted throughout the 4- quadrangle mapping area and bedrock mapping was compiled from existing geologic maps. Together, these maps include detailed surficial mapping of alluvium from the Date Creek, Weaver, Wickenburg, and Vulture Mountains as well as ancestral deposits of the Hassayampa River. The relationships between relict and modern alluvial fan and Hassayampa River deposits and their positions relative to pre-existing bedrock topography presents a glimpse into the arrival and development of the modern Hassayampa River system. The Flores 7 1⁄2' Quadrangle is located midway between the towns of Wickenburg and Congress in Yavapai County, Arizona, and is traversed by US Highway 93 and AZ-89. The quadrangle includes the lower piedmont of the Date Creek and Weaver mountain ranges as well as ancestral Hassayampa River deposits along the eastern edge. Although the majority of the Flores quadrangle is composed of various alluvial deposits some bedrock inselbergs related to the surrounding ranges are present. A drainage divide just west of the Flores quadrangle separates drainage basins feeding the McMullen Valley and Centennial Wash to the west and the Hassayampa River to the southeast. Geologic mapping was conducted under the joint State-Federal STATEMAP program, as specified in the National Geologic Mapping Act of 1992, and was jointly funded by the Arizona Geological Survey and the U.S. Geological Survey under STATEMAP assistance award #G18AC00298. Mapping was compiled digitally using ESRI ArcGIS software.