On the Validity of the Poisson Hypothesis for Low-Level Counting: Investigation of the Distributional Characteristics of Background Radiation with the NIST Individual Pulse Counting System 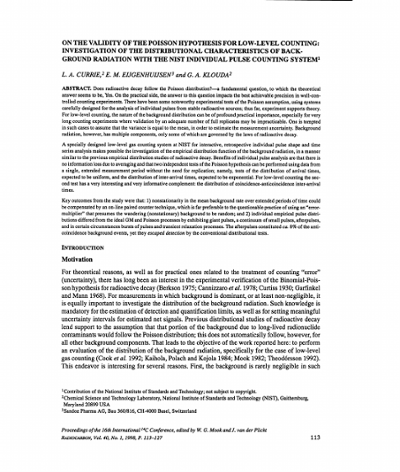 Currie, L. A., Eijgenhuijsen, E. M., & Klouda, G. A. (1998). On the validity of the Poisson hypothesis for low-level counting: Ivestigation of the distributional characteristics of background radiation with the NIST individual pulse counting system. Radiocarbon, 40(1), 113-127.

Does radioactive decay follow the Poisson distribution?—a fundamental question, to which the theoretical answer seems to be, Yes. On the practical side, the answer to this question impacts the best achievable precision in well-controlled counting experiments. There have been some noteworthy experimental tests of the Poisson assumption, using systems carefully designed for the analysis of individual pulses from stable radioactive sources; thus far, experiment supports theory. For low-level counting, the nature of the background distribution can be of profound practical importance, especially for very long counting experiments where validation by an adequate number of full replicates may be impracticable. One is tempted in such cases to assume that the variance is equal to the mean, in order to estimate the measurement uncertainty. Background radiation, however, has multiple components, only some of which are governed by the laws of radioactive decay. A specially designed low-level gas counting system at NIST for interactive, retrospective individual pulse shape and time series analysis makes possible the investigation of the empirical distribution function of the background radiation, in a manner similar to the previous empirical distribution studies of radioactive decay. Benefits of individual pulse analysis are that there is no information loss due to averaging and that two independent tests of the Poisson hypothesis can be performed using data from a single, extended measurement period without the need for replication; namely, tests of the distribution of arrival times, expected to be uniform, and the distribution of inter-arrival times, expected to be exponential. For low-level counting the second test has a very interesting and very informative complement: the distribution of coincidence-anticoincidence inter-arrival times. Key outcomes from the study were that: 1) nonstationarity in the mean background rate over extended periods of time could be compensated by an on-line paired counter technique, which is far preferable to the questionable practice of using an "error-multiplier" that presumes the wandering (nonstationary) background to be random; and 2) individual empirical pulse distributions differed from the ideal GM and Poisson processes by exhibiting giant pulses, a continuum of small pulses, afterpulses, and in certain circumstances bursts of pulses and transient relaxation processes. The afterpulses constituted ca. 8% of the anti-coincidence background events, yet they escaped detection by the conventional distributional tests.