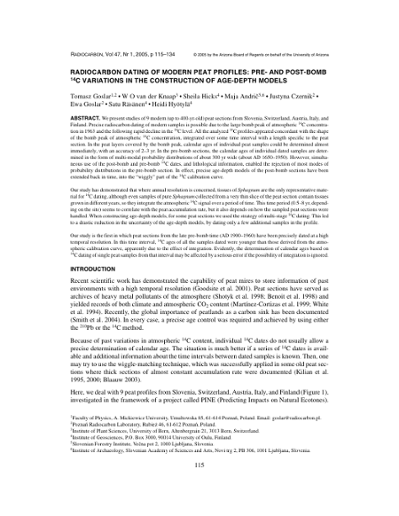 We present studies of 9 modern (up to 400-yr-old) peat sections from Slovenia, Switzerland, Austria, Italy, and Finland. Precise radiocarbon dating of modern samples is possible due to the large bomb peak of atmospheric 14C concentration in 1963 and the following rapid decline in the 14C level. All the analyzed 14C profiles appeared concordant with the shape of the bomb peak of atmospheric 14C concentration, integrated over some time interval with a length specific to the peat section. In the peat layers covered by the bomb peak, calendar ages of individual peat samples could be determined almost immediately, with an accuracy of 2-3 yr. In the pre-bomb sections, the calendar ages of individual dated samples are determined in the form of multi-modal probability distributions of about 300 yr wide (about AD 1650-1950). However, simultaneous use of the post-bomb and pre-bomb 14C dates, and lithological information, enabled the rejection of most modes of probability distributions in the pre-bomb section. In effect, precise age-depth models of the post-bomb sections have been extended back in time, into the "wiggly" part of the 14C calibration curve. Our study has demonstrated that where annual resolution is concerned, tissues of Sphagnum are the only representative material for 14C dating, although even samples of pure Sphagnum collected from a very thin slice of the peat section contain tissues grown in different years, so they integrate the atmospheric 14C signal over a period of time. This time period (0.5-8 yr, depending on the site) seems to correlate with the peat accumulation rate, but it also depends on how the sampled peat sections were handled. When constructing age-depth models, for some peat sections we used the strategy of multi-stage 14C dating. This led to a drastic reduction in the uncertainty of the age-depth models, by dating only a few additional samples in the profile. Our study is the first in which peat sections from the late pre-bomb time (AD 1900-1960) have been precisely dated at a high temporal resolution. In this time interval, 14C ages of all the samples dated were younger than those derived from the atmospheric ccalibration curve, apparently due to the effect of integration. Evidently, the determination of calendar ages based on 14C dating of single peat examples from that interval may be affected by a serious error if the possibility of integration is ignored.