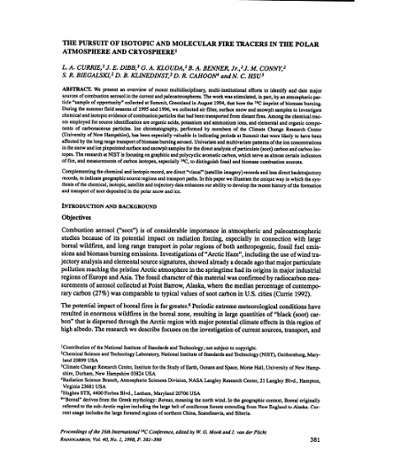 We present an overview of recent multidisciplinary, multi-institutional efforts to identify and date major sources of combustion aerosol in the current and paleoatmospheres. The work was stimulated, in part, by an atmospheric particle "sample of opportunity" collected at Summit, Greenland in August 1994, that bore the 14C imprint of biomass burning. During the summer field seasons of 1995 and 1996, we collected air filter, surface snow and snowpit samples to investigate chemical and isotopic evidence of combustion particles that had been transported from distant fires. Among the chemical tracers employed for source identification are organic acids, potassium and ammonium ions, and elemental and organic components of carbonaceous particles. Ion chromatography, performed by members of the Climate Change Research Center (University of New Hampshire), has been especially valuable in indicating periods at Summit that were likely to have been affected by the long range transport of biomass burning aerosol. Univariate and multivariate patterns of the ion concentrations in the snow and ice pinpointed surface and snowpit samples for the direct analysis of particulate (soot) carbon and carbon isotopes. The research at NIST is focusing on graphitic and polycyclic aromatic carbon, which serve as almost certain indicators of fire, and measurements of carbon isotopes, especially 14C, to distinguish fossil and biomass combustion sources. Complementing the chemical and isotopic record, are direct "visual" (satellite imagery) records and less direct backtrajectory records, to indicate geographic source regions and transport paths. In this paper we illustrate the unique way in which the synthesis of the chemical, isotopic, satellite and trajectory data enhances our ability to develop the recent history of the formation and transport of soot deposited in the polar snow and ice.