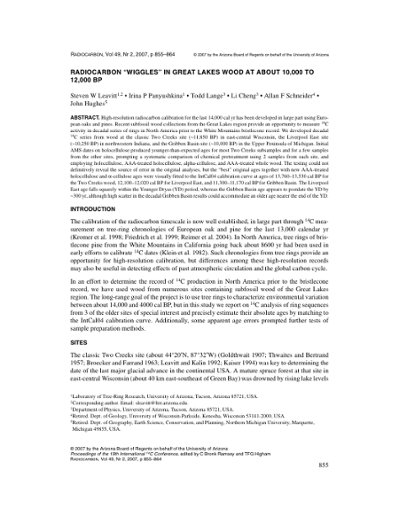 High-resolution radiocarbon calibration for the last 14,000 cal yr has been developed in large part using European oaks and pines. Recent subfossil wood collections from the Great Lakes region provide an opportunity to measure 14C activity in decadal series of rings in North America prior to the White Mountains bristlecone record. We developed decadal 14C series from wood at the classic Two Creeks site (~11,850 BP) in east-central Wisconsin, the Liverpool East site (~10,250 BP) in northwestern Indiana, and the Gribben Basin site (~10,000 BP) in the Upper Peninsula of Michigan. Initial AMS dates on holocellulose produced younger-than-expected ages for most Two Creeks subsamples and for a few samples from the other sites, prompting a systematic comparison of chemical pretreatment using 2 samples from each site, and employing holocellulose, AAA-treated holocellulose, alpha-cellulose, and AAA-treated whole wood. The testing could not definitively reveal the source of error in the original analyses, but the best original ages together with new AAA-treated holocellulose and a-cellulose ages were visually fitted to the IntCal04 calibration curve at ages of 13,760-13,530 cal BP for the Two Creeks wood, 12,100-12,020 cal BP for Liverpool East, and 11,300-11,170 cal BP for Gribben Basin. The Liverpool East age falls squarely within the Younger Dryas (YD) period, whereas the Gribben Basin age appears to postdate the YD by ~300 yr, although high scatter in the decadal Gribben Basin results could accommodate an older age nearer the end of the YD.