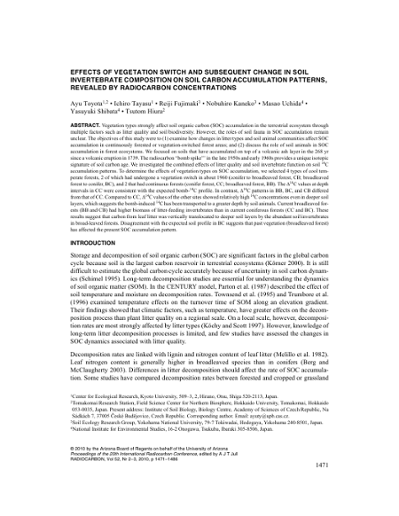 From the 20th International Radiocarbon Conference held in Kona, Hawaii, USA, May 31-June 3, 2009.

Vegetation types strongly affect soil organic carbon (SOC) accumulation in the terrestrial ecosystem through multiple factors such as litter quality and soil biodiversity. However, the roles of soil fauna in SOC accumulation remain unclear. The objectives of this study were to (1) examine how changes in litter types and soil animal communities affect SOC accumulation in continuously forested or vegetation-switched forest areas; and (2) discuss the role of soil animals in SOC accumulation in forest ecosystems. We focused on soils that have accumulated on top of a volcanic ash layer in the 268 yr since a volcanic eruption in 1739. The radiocarbon "bomb spike" in the late 1950s and early 1960s provides a unique isotopic signature of soil carbon age. We investigated the combined effects of litter quality and soil invertebrate function on soil 14C accumulation patterns. To determine the effects of vegetation types on SOC accumulation, we selected 4 types of cool temperate forests, 2 of which had undergone a vegetation switch in about 1960 (conifer to broadleaved forest, CB; broadleaved forest to conifer, BC), and 2 that had continuous forests (conifer forest, CC; broadleaved forest, BB). The ∆14C values at depth intervals in CC were consistent with the expected bomb-14C profile. In contrast, ∆14C patterns in BB, BC, and CB differed from that of CC. Compared to CC, ∆14C values of the other sites showed relatively high 14C concentrations even in deeper soil layers, which suggests the bomb-induced 14C has been transported to a greater depth by soil animals. Current broadleaved forests (BB and CB) had higher biomass of litter-feeding invertebrates than in current coniferous forests (CC and BC). These results suggest that carbon from leaf litter was vertically translocated to deeper soil layers by the abundant soil invertebrates in broad-leaved forests. Disagreement with the expected soil profile in BC suggests that past vegetation (broadleaved forest) has affected the present SOC accumulation pattern.