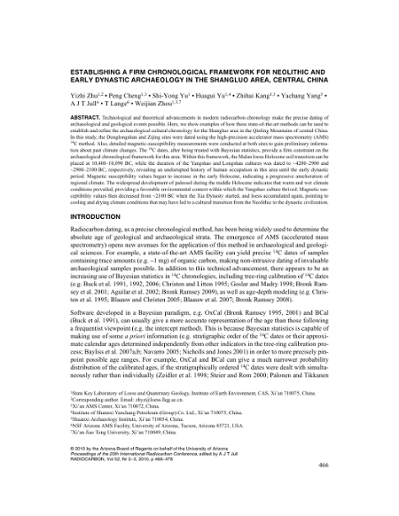 From the 20th International Radiocarbon Conference held in Kona, Hawaii, USA, May 31-June 3, 2009.

Technological and theoretical advancements in modern radiocarbon chronology make the precise dating of archaeological and geological events possible. Here, we show examples of how these state-of-the-art methods can be used to establish and refine the archaeological cultural chronology for the Shangluo area in the Qinling Mountains of central China. In this study, the Donglongshan and Zijing sites were dated using the high-precision accelerator mass spectrometry (AMS) 14C method. Also, detailed magnetic-susceptibility measurements were conducted at both sites to gain preliminary information about past climate changes. The 14C dates, after being treated with Bayesian statistics, provide a firm constraint on the archaeological chronological framework for this area. Within this framework, the Malan loess-Holocene soil transition can be placed at 10,400-10,090 BC, while the duration of the Yangshao and Longshan cultures was dated to ~4200-2900 and ~2900-2100 BC, respectively, revealing an undisrupted history of human occupation in this area until the early dynastic period. Magnetic susceptibility values began to increase in the early Holocene, indicating a progressive amelioration of regional climate. The widespread development of paleosol during the middle Holocene indicates that warm and wet climate conditions prevailed, providing a favorable environmental context within which the Yangshao culture thrived. Magnetic susceptibility values then decreased from ~2100 BC when the Xia Dynasty started, and loess accumulated again, pointing to cooling and drying climate conditions that may have led to a cultural transition from the Neolithic to the dynastic civilization.