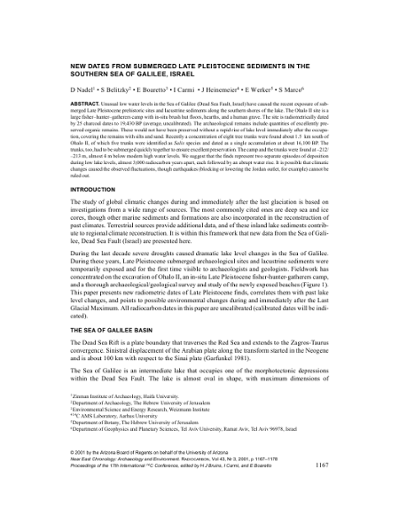 Unusual low water levels in the Sea of Galilee (Dead Sea Fault, Israel) have caused the recent exposure of submerged Late Pleistocene prehistoric sites and lacustrine sediments along the southern shores of the lake. The Ohalo II site is a large fisher-hunter-gatherers camp with in-situ brush hut floors, hearths, and a human grave. The site is radiometrically dated by 25 charcoal dates to 19,430 BP (average, uncalibrated). The archaeological remains include quantities of excellently preserved organic remains. These would not have been preserved without a rapid rise of lake level immediately after the occupation, covering the remains with silts and sand. Recently a concentration of eight tree trunks were found about 1.5 km south of Ohalo II, of which five trunks were identified as Salix species and dated as a single accumulation at about 16,100 BP. The trunks, too, had to be submerged quickly together to ensure excellent preservation. The camp and the trunks were found at –212/–213 m, almost 4 m below modern high water levels. We suggest that the finds represent two separate episodes of deposition during low lake levels, almost 3,000 radiocarbon years apart, each followed by an abrupt water rise. It is possible that climatic changes caused the observed fluctuations, though earthquakes (blocking or lowering the Jordan outlet, for example) cannot be ruled out.