History of the Environment and Population of the Old Town of Klaipėda, Western Lithuania: Multidisciplinary Approach to the Last Millennium 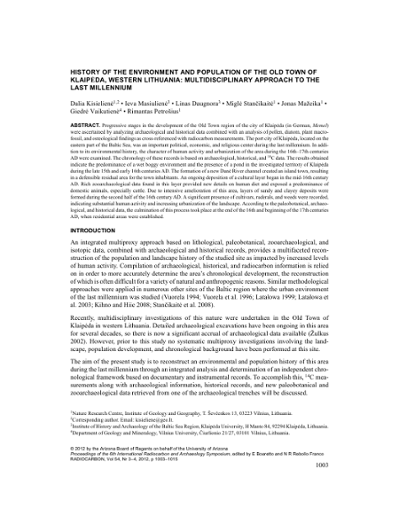 Progressive stages in the development of the Old Town region of the city of Klaipėda (in German, Memel) were ascertained by analyzing archaeological and historical data combined with an analysis of pollen, diatom, plant macrofossil, and osteological findings as cross-referenced with radiocarbon measurements. The port city of Klaipëda, located on the eastern part of the Baltic Sea, was an important political, economic, and religious center during the last millennium. In addition to its environmental history, the character of human activity and urbanization of the area during the 16th–17th centuries AD were examined. The chronology of these records is based on archaeological, historical, and 14C data. The results obtained indicate the predominance of a wet boggy environment and the presence of a pond in the investigated territory of Klaipëda during the late 15th and early 16th centuries AD. The formation of a new Danė River channel created an island town, resulting in a defensible residual area for the town inhabitants. An ongoing deposition of a cultural layer began in the mid-16th century AD. Rich zooarchaeological data found in this layer provided new details on human diet and exposed a predominance of domestic animals, especially cattle. Due to intensive amelioration of this area, layers of sandy and clayey deposits were formed during the second half of the 16th century AD. A significant presence of cultivars, ruderals, and weeds were recorded, indicating substantial human activity and increasing urbanization of the landscape. According to the paleobotanical, archaeo-logical, and historical data, the culmination of this process took place at the end of the 16th and beginning of the 17th centuries AD, when residential areas were established.