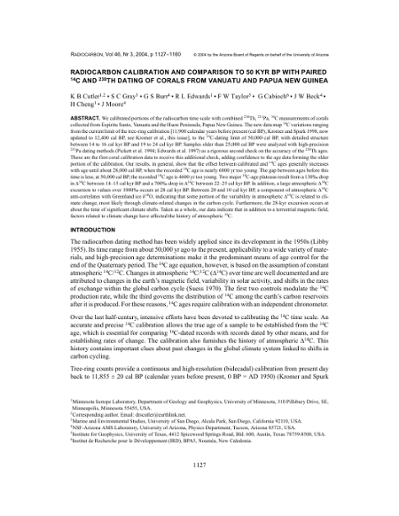 We calibrated portions of the radiocarbon time scale with combined 230Th, 231Pa, 14C measurements of corals collected from Espiritu Santo, Vanuatu and the Huon Peninsula, Papua New Guinea. The new data map 14C variations ranging from the current limit of the tree-ring calibration (11,900 calendar years before present [cal BP], Kromer and Spurk 1998, now updated to 12,400 cal BP, see Kromer et al., this issue), to the 14C-dating limit of 50,000 cal BP, with detailed structure between 14 to 16 cal kyr BP and 19 to 24 cal kyr BP. Samples older than 25,000 cal BP were analyzed with high-precision 231Pa dating methods (Pickett et al. 1994; Edwards et al. 1997) as a rigorous second check on the accuracy of the 230Th ages. These are the first coral calibration data to receive this additional check, adding confidence to the age data forming the older portion of the calibration. Our results, in general, show that the offset between calibrated and 14C ages generally increases with age until about 28,000 cal BP, when the recorded 14C age is nearly 6800 yr too young. The gap between ages before this time is less; at 50,000 cal BP, the recorded 14C age is 4600 yr too young. Two major 14C-age plateaus result from a 13 ppm drop in Delta-14C between 14-15 cal kyr BP and a 700ppm ppm drop in Delta-14C between 22-25 cal kyr BP. In addition, a large atmospheric Delta-14C excursion to values over 1000 ppm occurs at 28 cal kyr BP. Between 20 and 10 cal kyr BP, a component of atmospheric Delta-14C anti-correlates with Greenland ice delta-18O, indicating that some portion of the variability in atmospheric Delta-14C is related to climate change, most likely through climate-related changes in the carbon cycle. Furthermore, the 28-kyr excursion occurs at about the time of significant climate shifts. Taken as a whole, our data indicate that in addition to a terrestrial magnetic field, factors related to climate change have affected the history of atmospheric 14C.