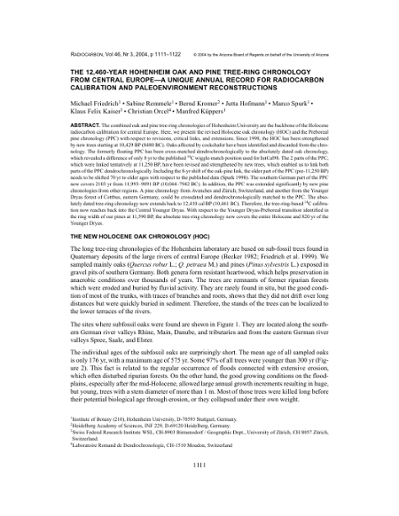 The combined oak and pine tree-ring chronologies of Hohenheim University are the backbone of the Holocene radiocarbon calibration for central Europe. Here, we present the revised Holocene oak chronology (HOC) and the Preboreal pine chronology (PPC) with respect to revisions, critical links, and extensions. Since 1998, the HOC has been strengthened by new trees starting at 10,429 BP (8480 BC). Oaks affected by cockchafer have been identified and discarded from the chronology. The formerly floating PPC has been cross-matched dendrochronologically to the absolutely dated oak chronology, which revealed a difference of only 8 yr to the published 14C wiggle-match position used for IntCal98. The 2 parts of the PPC, which were linked tentatively at 11,250 BP, have been revised and strengthened by new trees, which enabled us to link both parts of the PPC dendrochronologically. Including the 8-yr shift of the oak-pine link, the older part of the PPC (pre-11,250 BP) needs to be shifted 70 yr to older ages with respect to the published data (Spurk 1998). The southern German part of the PPC now covers 2103 yr from 11,993-9891 BP (10,044-7942 BC). In addition, the PPC was extended significantly by new pine chronologies from other regions. A pine chronology from Avenches and Zurich, Switzerland, and another from the Younger Dryas forest of Cottbus, eastern Germany, could be crossdated and dendrochronologically matched to the PPC. The absolutely dated tree-ring chronology now extends back to 12,410 cal BP (10,461 BC). Therefore, the tree-ring based 14C calibration now reaches back into the Central Younger Dryas. With respect to the Younger Dryas-Preboreal transition identified in the ring width of our pines at 11,590 BP, the absolute tree-ring chronology now covers the entire Holocene and 820 yr of the Younger Dryas.