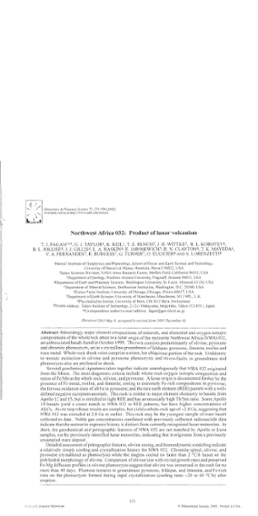 Mineralogy, major element compositions of minerals, and elemental and oxygen isotopic compositions of the whole rock attest to a lunar origin of the meteorite Northwest Africa 032 (NWA 032), an unbrecciated basalt found in October 1999. The rock consists predominantly of olivine, pyroxene and chromite phenocrysts, set in a crystalline groundmass of feldspar, pyroxene, ilmenite, troilite and trace metal. Whole-rock shock veins comprise a minor, but ubiquitous portion of the rock. Undulatory to mosaic extinction in olivine and pyroxene phenocrysts and micro-faults in groundmass and phenocrysts also are attributed to shock. Several geochemical signatures taken together indicate unambiguously that NWA 032 originated from the Moon. The most diagnostic criteria include whole-rock oxygen isotopic composition and ratios of Fe:Mn in the whole rock, olivine, and pyroxene. A lunar origin is documented further by the presence of Fe-metal, troilite, and ilmenite; zoning to extremely Fe-rich compositions in pyroxene; the ferrous oxidation state of all Fe in pyroxene; and the rare-earth element pattern with a well-defined negative europium anomaly. This rock is similar in major element chemistry to basalts from Apollo 12 and 15, but is enriched in light rare-earth elements and has an unusually high Th/Sm ratio. Some Apollo 14 basalts yield a closer match to NWA 032 in rare-earth element patterns, but have higher concentrations of Al2O3. Ar-Ar step release results are complex, but yield a whole-rock age of ca. 2.8 Ga, suggesting that NWA 032 was extruded at 2.8 Ga or earlier. This rock may be the youngest sample of mare basalt collected to date. Noble gas concentrations combined with previously collected radionuclide data indicate that the meteorite exposure history is distinct from currently recognized lunar meteorites. In short, the geochemical and petrographic features of NWA 032 are not matched by Apollo or Luna samples, nor by previously identified lunar meteorites, indicating that it originates from a previously unsampled mare deposit. Detailed assessment of petrographic features, olivine zoning, and thermodynamic modelling indicate a relatively simple cooling and crystallization history for NWA 032. Chromite-spinel, olivine, and pyroxene crystallized as phenocrysts while the magma cooled no faster than 2 degrees C/hr based on the polyhedral morphology of olivine. Comparison of olivine size with crystal growth rates and preserved Fe-Mg diffusion profiles in olivine phenocrysts suggest that olivine was immersed in the melt for no more than 40 days. Plumose textures in groundmass pyroxene, feldspar, and ilmenite, and Fe-rich rims on the phenocrysts formed during rapid crystallization (cooling rates ~20 to 60 degrees C/hr) after eruption.