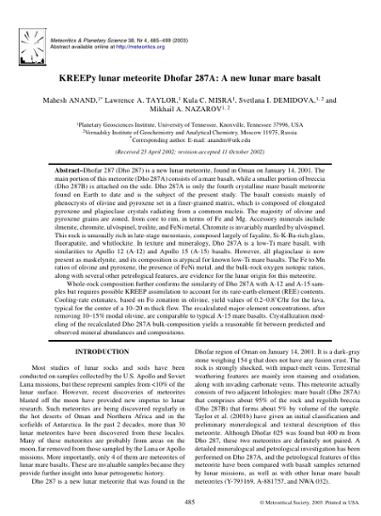 Dhofar 287 (Dho 287) is a new lunar meteorite, found in Oman on January 14, 2001. The main portion of this meteorite (Dho 287A) consists of a mare basalt, while a smaller portion of breccia (Dho 287B) is attached on the side. Dho 287A is only the fourth crystalline mare basalt meteorite found on Earth to date and is the subject of the present study. The basalt consists mainly of phenocrysts of olivine and pyroxene set in a finer-grained matrix, which is composed of elongated pyroxene and plagioclase crystals radiating from a common nucleii. The majority of olivine and pyroxene grains are zoned, from core to rim, in terms of Fe and Mg. Accessory minerals include ilmenite, chromite, ulvaspinel, troilite, and FeNi metal. Chromite is invariably mantled by ulvaspinel. This rock is unusually rich in late-stage mesostasis, composed largely of fayalite, Si-K-Ba-rich glass, fluorapatite, and whitlockite. In texture and mineralogy, Dho 287A is a low-Ti mare basalt, with similarities to Apollo 12 (A-12) and Apollo 15 (A-15) basalts. However, all plagioclase is now present as maskelynite, and its composition is atypical for known low-Ti mare basalts. The Fe to Mn ratios of olivine and pyroxene, the presence of FeNi metal, and the bulk-rock oxygen isotopic ratios, along with several other petrological features, are evidence for the lunar origin for this meteorite. Whole-rock composition further confirms the similarity of Dho 287A with A-12 and A-15 sam- ples but requires possible KREEP assimilation to account for its rare-earth-element (REE) contents. Cooling-rate estimates, based on Fo zonation in olivine, yield values of 0.2-0.8 degrees C/hr for the lava, typical for the center of a 10-20 m thick flow. The recalculated major-element concentrations, after removing 10-15% modal olivine, are comparable to typical A-15 mare basalts. Crystallization mod- eling of the recalculated Dho 287A bulk-composition yields a reasonable fit between predicted and observed mineral abundances and compositions.