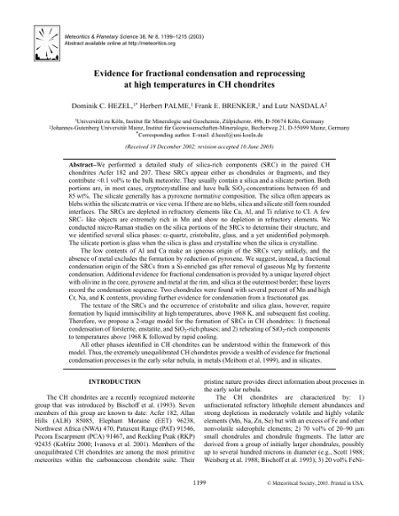 We performed a detailed study of silica-rich components (SRC) in the paired CH chondrites Acfer 182 and 207. These SRCs appear either as chondrules or fragments, and they contribute <0.1 vol% to the bulk meteorite. They usually contain a silica and a silicate portion. Both portions are, in most cases, cryptocrystalline and have bulk SiO2-concentrations between 65 and 85 wt%. The silicate generally has a pyroxene normative composition. The silica often appears as blebs within the silicate matrix or vice versa. If there are no blebs, silica and silicate still form rounded interfaces. The SRCs are depleted in refractory elements like Ca, Al, and Ti relative to CI. A few SRC- like objects are extremely rich in Mn and show no depletion in refractory elements. We conducted micro-Raman studies on the silica portions of the SRCs to determine their structure, and we identified several silica phases: -quartz, cristobalite, glass, and a yet unidentified polymorph. The silicate portion is glass when the silica is glass and crystalline when the silica is crystalline. The low contents of Al and Ca make an igneous origin of the SRCs very unlikely, and the absence of metal excludes the formation by reduction of pyroxene. We suggest, instead, a fractional condensation origin of the SRCs from a Si-enriched gas after removal of gaseous Mg by forsterite condensation. Additional evidence for fractional condensation is provided by a unique layered object with olivine in the core, pyroxene and metal at the rim, and silica at the outermost border; these layers record the condensation sequence. Two chondrules were found with several percent of Mn and high Cr, Na, and K contents, providing further evidence for condensation from a fractionated gas. The texture of the SRCs and the occurrence of cristobalite and silica glass, however, require formation by liquid immiscibility at high temperatures, above 1968 K, and subsequent fast cooling. Therefore, we propose a 2-stage model for the formation of SRCs in CH chondrites: 1) fractional condensation of forsterite, enstatite, and SiO2-rich phases; and 2) reheating of SiO2-rich components to temperatures above 1968 K followed by rapid cooling. All other phases identified in CH chondrites can be understood within the framework of this model. Thus, the extremely unequilibrated CH chondrites provide a wealth of evidence for fractional condensation processes in the early solar nebula, in metals (Meibom et al. 1999), and in silicates.