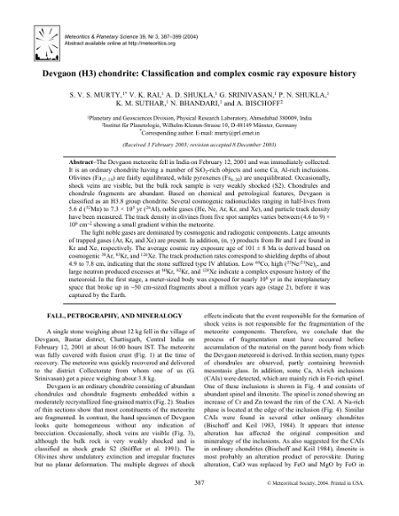 The Devgaon meteorite fell in India on February 12, 2001 and was immediately collected. It is an ordinary chondrite having a number of SiO2-rich objects and some Ca, Al-rich inclusions. Olivines (Fa17-19) are fairly equilibrated, while pyroxenes (Fs4-20) are unequilibrated. Occasionally, shock veins are visible, but the bulk rock sample is very weakly shocked (S2). Chondrules and chondrule fragments are abundant. Based on chemical and petrological features, Devgaon is classified as an H3.8 group chondrite. Several cosmogenic radionuclides ranging in half-lives from 5.6 d (52Mn) to 7.3 x 10^5 yr (26Al), noble gases (He, Ne, Ar, Kr, and Xe), and particle track density have been measured. The track density in olivines from five spot samples varies between (4.6 to 9) x 10^6 cm^(-2) showing a small gradient within the meteorite. The light noble gases are dominated by cosmogenic and radiogenic components. Large amounts of trapped gases (Ar, Kr, and Xe) are present. In addition, (n, gamma) products from Br and I are found in Kr and Xe, respectively. The average cosmic ray exposure age of 101 +/- 8 Ma is derived based on cosmogenic 38Ar, 83Kr, and 126Xe. The track production rates correspond to shielding depths of about 4.9 to 7.8 cm, indicating that the stone suffered type IV ablation. Low 60Co, high (22Ne/21Ne)c, and large neutron produced excesses at 80Kr, 82Kr, and 128Xe indicate a complex exposure history of the meteoroid. In the first stage, a meter-sized body was exposed for nearly 108 yr in the interplanetary space that broke up in ~50 cm-sized fragments about a million years ago (stage 2), before it was captured by the Earth.