The fall, recovery, and classification of the Park Forest meteorite 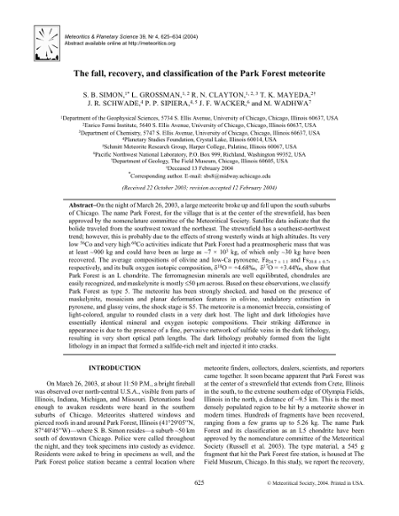 On the night of March 26, 2003, a large meteorite broke up and fell upon the south suburbs of Chicago. The name Park Forest, for the village that is at the center of the strewnfield, has been approved by the nomenclature committee of the Meteoritical Society. Satellite data indicate that the bolide traveled from the southwest toward the northeast. The strewnfield has a southeast-northwest trend; however, this is probably due to the effects of strong westerly winds at high altitudes. Its very low 56Co and very high 60Co activities indicate that Park Forest had a preatmospheric mass that was at least ~900 kg and could have been as large as ~7 x 10^3 kg, of which only ~30 kg have been recovered. The average compositions of olivine and low-Ca pyroxene, Fa24.7 +/- 1.1 and Fs20.8 +/- 0.7, respectively, and its bulk oxygen isotopic composition, delta-18O = +4.68 ppm, delta-17O = +3.44 ppm, show that Park Forest is an L chondrite. The ferromagnesian minerals are well equilibrated, chondrules are easily recognized, and maskelynite is mostly less than or equal to 50 micrometers across. Based on these observations, we classify Park Forest as type 5. The meteorite has been strongly shocked, and based on the presence of maskelynite, mosaicism and planar deformation features in olivine, undulatory extinction in pyroxene, and glassy veins, the shock stage is S5. The meteorite is a monomict breccia, consisting of light-colored, angular to rounded clasts in a very dark host. The light and dark lithologies have essentially identical mineral and oxygen isotopic compositions. Their striking difference in appearance is due to the presence of a fine, pervasive network of sulfide veins in the dark lithology, resulting in very short optical path lengths. The dark lithology probably formed from the light lithology in an impact that formed a sulfide-rich melt and injected it into cracks.