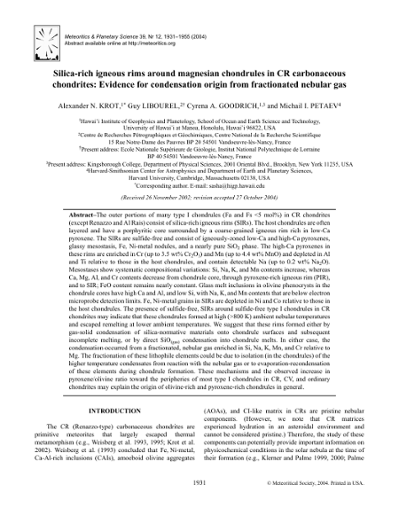 The outer portions of many type I chondrules (Fa and Fs <5 mol%) in CR chondrites (except Renazzo and Al Rais) consist of silica-rich igneous rims (SIRs). The host chondrules are often layered and have a porphyritic core surrounded by a coarse-grained igneous rim rich in low-Capyroxene. The SIRs are sulfide-free and consist of igneously-zoned low-Ca and high-Ca pyroxenes, glassy mesostasis, Fe, Ni-metal nodules, and a nearly pure SiO2 phase. The high-Ca pyroxenes in these rims are enriched in Cr (up to 3.5 wt% Cr2O3) and Mn (up to 4.4 wt% MnO) and depleted in Al and Ti relative to those in the host chondrules, and contain detectable Na (up to 0.2 wt% Na2O).Mesostases show systematic compositional variations: Si, Na, K, and Mn contents increase, whereas Ca, Mg, Al, and Cr contents decrease from chondrule core, through pyroxene-rich igneous rim (PIR), and to SIR; FeO content remains nearly constant. Glass melt inclusions in olivine phenocrysts in the chondrule cores have high Ca and Al, and low Si, with Na, K, and Mn contents that are below electron microprobe detection limits. Fe, Ni-metal grains in SIRs are depleted in Ni and Co relative to those in the host chondrules. The presence of sulfide-free, SIRs around sulfide-free type I chondrules in CR chondrites may indicate that these chondrules formed at high (>800 K) ambient nebular temperatures and escaped remelting at lower ambient temperatures. We suggest that these rims formed either by gas-solid condensation of silica-normative materials onto chondrule surfaces and subsequent incomplete melting, or by direct SiO (gas) condensation into chondrule melts. In either case, the condensation occurred from a fractionated, nebular gas enriched in Si, Na, K, Mn, and Cr relative to Mg. The fractionation of these lithophile elements could be due to isolation (in the chondrules) of the higher temperature condensates from reaction with the nebular gas or to evaporation-recondensation of these elements during chondrule formation. These mechanisms and the observed increase in pyroxene/olivine ratio toward the peripheries of most type I chondrules in CR, CV, and ordinary chondrites may explain the origin of olivine-rich and pyroxene-rich chondrules in general.