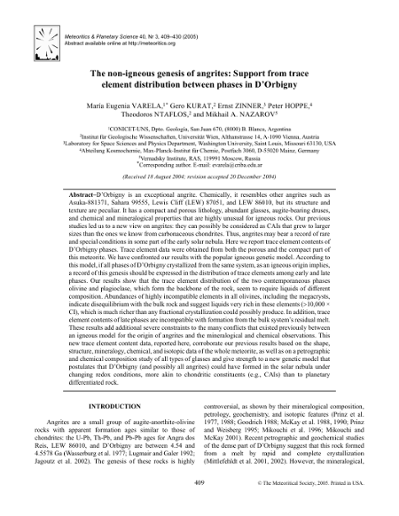 D'Orbigny is an exceptional angrite. Chemically, it resembles other angrites such as Asuka-881371, Sahara 99555, Lewis Cliff (LEW) 87051, and LEW 86010, but its structure and texture are peculiar. It has a compact and porous lithology, abundant glasses, augite-bearing druses, and chemical and mineralogical properties that are highly unusual for igneous rocks. Our previous studies led us to a new view on angrites: they can possibly be considered as CAIs that grew to larger sizes than the ones we know from carbonaceous chondrites. Thus, angrites may bear a record of rare and special conditions in some part of the early solar nebula. Here we report trace element contents of D'Orbigny phases. Trace element data were obtained from both the porous and the compact part of this meteorite. We have confronted our results with the popular igneous genetic model. According to this model, if all phases of D'Orbigny crystallized from the same system, as an igneous origin implies, a record of this genesis should be expressed in the distribution of trace elements among early and late phases. Our results show that the trace element distribution of the two contemporaneous phases olivine and plagioclase, which form the backbone of the rock, seem to require liquids of different composition. Abundances of highly incompatible elements in all olivines, including the megacrysts, indicate disequilibrium with the bulk rock and suggest liquids very rich in these elements (>10,000 x CI), which is much richer than any fractional crystallization could possibly produce. In addition, trace element contents of late phases are incompatible with formation from the bulk systems residual melt. These results add additional severe constraints to the many conflicts that existed previously between an igneous model for the origin of angrites and the mineralogical and chemical observations. This new trace element content data, reported here, corroborate our previous results based on the shape, structure, mineralogy, chemical, and isotopic data of the whole meteorite, as well as on a petrographic and chemical composition study of all types of glasses and give strength to a new genetic model that postulates that D'Orbigny (and possibly all angrites) could have formed in the solar nebula under changing redox conditions, more akin to chondritic constituents (e.g., CAIs) than to planetary differentiated rock.