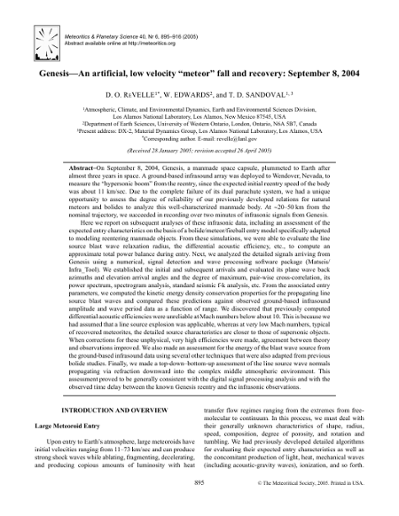 On September 8, 2004, Genesis, a manmade space capsule, plummeted to Earth after almost three years in space. A ground-based infrasound array was deployed to Wendover, Nevada, to measure the "hypersonic boom" from the reentry, since the expected initial reentry speed of the body was about 11 km/sec. Due to the complete failure of its dual parachute system, we had a unique opportunity to assess the degree of reliability of our previously developed relations for natural meteors and bolides to analyze this well-characterized manmade body. At ~20-50 km from the nominal trajectory, we succeeded in recording over two minutes of infrasonic signals from Genesis. Here we report on subsequent analyses of these infrasonic data, including an assessment of the expected entry characteristics on the basis of a bolide/meteor/fireball entry model specifically adapted to modeling reentering manmade objects. From these simulations, we were able to evaluate the line source blast wave relaxation radius, the differential acoustic efficiency, etc., to compute an approximate total power balance during entry. Next, we analyzed the detailed signals arriving from Genesis using a numerical, signal detection and wave processing software package (Matseis/ Infra_Tool). We established the initial and subsequent arrivals and evaluated its plane wave back azimuths and elevation arrival angles and the degree of maximum, pair-wise cross-correlation, its power spectrum, spectrogram analysis, standard seismic f-k analysis, etc. From the associated entryparameters, we computed the kinetic energy density conservation properties for the propagating line source blast waves and compared these predictions against observed ground-based infrasound amplitude and wave period data as a function of range. We discovered that previously computed differential acoustic efficiencies were unreliable at Mach numbers below about 10. This is because we had assumed that a line source explosion was applicable, whereas at very low Mach numbers, typical of recovered meteorites, the detailed source characteristics are closer to those of supersonic objects. When corrections for these unphysical, very high efficiencies were made, agreement between theory and observations improved. We also made an assessment for the energy of the blast wave source from the ground-based infrasound data using several other techniques that were also adapted from previous bolide studies. Finally, we made a top-downbottom-up assessment of the line source wave normals propagating via refraction downward into the complex middle atmospheric environment. This assessment proved to be generally consistent with the digital signal processing analysis and with the observed time delay between the known Genesis reentry and the infrasonic observations.