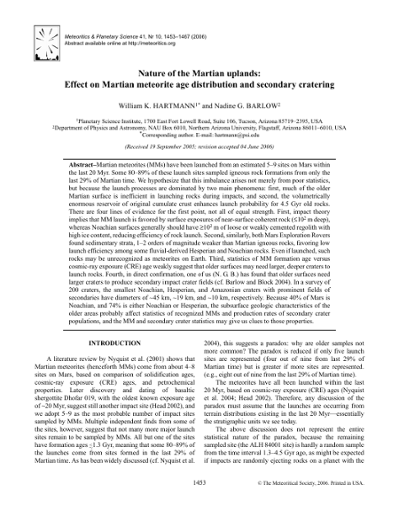 From the proceedings of the Workshop on the Role of Volatiles and Atmospheres on Martian Impact Craters held on July 11-14, 2005, at the Johns Hopkins University Applied Physics Laboratory.

Martian meteorites (MMs) have been launched from an estimated 5-9 sites on Mars within the last 20 Myr. Some 80-89% of these launch sites sampled igneous rock formations from only the last 29% of Martian time. We hypothesize that this imbalance arises not merely from poor statistics, but because the launch processes are dominated by two main phenomena: first, much of the older Martian surface is inefficient in launching rocks during impacts, and second, the volumetrically enormous reservoir of original cumulate crust enhances launch probability for 4.5 Gyr old rocks. There are four lines of evidence for the first point, not all of equal strength. First, impact theory implies that MM launch is favored by surface exposures of near-surface coherent rock (10^2 m deep), whereas Noachian surfaces generally should have 10^2 m of loose or weakly cemented regolith with high ice content, reducing efficiency of rock launch. Second, similarly, both Mars Exploration Rovers found sedimentary strata, 1-2 orders of magnitude weaker than Martian igneous rocks, favoring low launch efficiency among some fluvial-derived Hesperian and Noachian rocks. Even if launched, such rocks may be unrecognized as meteorites on Earth. Third, statistics of MM formation age versus cosmic-ray exposure (CRE) age weakly suggest that older surfaces may need larger, deeper craters to launch rocks. Fourth, in direct confirmation, one of us (N. G. B.) has found that older surfaces need larger craters to produce secondary impact crater fields (cf. Barlow and Block 2004). In a survey of 200 craters, the smallest Noachian, Hesperian, and Amazonian craters with prominent fields of secondaries have diameters of ~45 km, ~19 km, and ~10 km, respectively. Because 40% of Mars is Noachian, and 74% is either Noachian or Hesperian, the subsurface geologic characteristics of the older areas probably affect statistics of recognized MMs and production rates of secondary crater populations, and the MM and secondary crater statistics may give us clues to those properties.