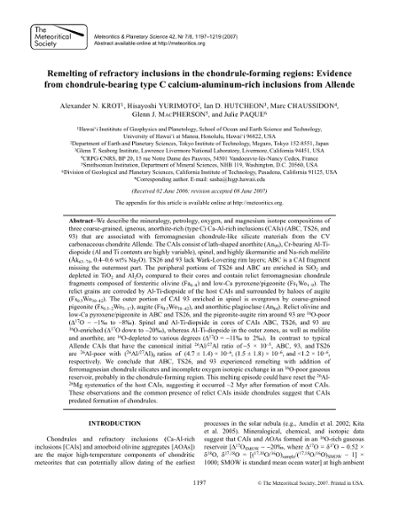 We describe the mineralogy, petrology, oxygen, and magnesium isotope compositions of three coarse-grained, igneous, anorthite-rich (type degrees C) Ca-Al-rich inclusions (CAIs) (ABC, TS26, and 93) that are associated with ferromagnesian chondrule-like silicate materials from the CV carbonaceous chondrite Allende. The CAIs consist of lath-shaped anorthite (An99), Cr-bearing Al-Ti-diopside (Al and Ti contents are highly variable), spinel, and highly åkermanitic and Na-rich melilite (Åk63-74, 0.4-0.6 wt% Na2O). TS26 and 93 lack Wark-Lovering rim layers; ABC is a CAI fragment missing the outermost part. The peripheral portions of TS26 and ABC are enriched in SiO2 and depleted in TiO2 and Al2O3 compared to their cores and contain relict ferromagnesian chondrule fragments composed of forsteritic olivine (Fa6-8) and low-Ca pyroxene/pigeonite (Fs1 Wo1-9). The relict grains are corroded by Al-Ti-diopside of the host CAIs and is surrounded by haloes of augite (Fs0.5 Wo30-42), augite (Fs0.5 Wo38-42), and anorthitic plagioclase (An84). Relict olivine and low-Ca pyroxene/pigeonite in ABC and TS26, and the pigeonite-augite rim around 93 are 16O-poor (Delta-17O ~ -1 ppm to -8 ppm). Spinel and Al-Ti-diopside in cores of CAIs ABC, TS26, and 93 are 16O-enriched (Delta-17O down to -20 ppm), whereas Al-Ti-diopside iin the outer zones, as well as melilite and anorthite, are 16O-depleted to various degrees (Delta-17O = -11 ppm to 2 ppm). In contrast to typical Allende CAIs that have the canonical initial 26Al/27Al ratio of ~5 x 10^(-5), ABC, 93, and TS26 are 26Al-poor with (26Al/27Al)0 ratios of (4.7 +/- 1.4) x 10^(-6), (1.5 +/- 1.8) x 10^(-6), and <1.2 x 10^(-6), respectively. We conclude that ABC, TS26, and 93 experienced remelting with addition of ferromagnesian chondrule silicates and incomplete oxygen isotopic exchange in an 16O-poor gaseous reservoir, probably in the chondrule-forming region. This melting episode could have reset the 26Al-26Mg systematics of the host CAIs, suggesting it occured ~Myr after fomation of most CAIs. These observations and the common presence of relict CAIs inside chondrules suggest that CAIs predated formation of chondrules.