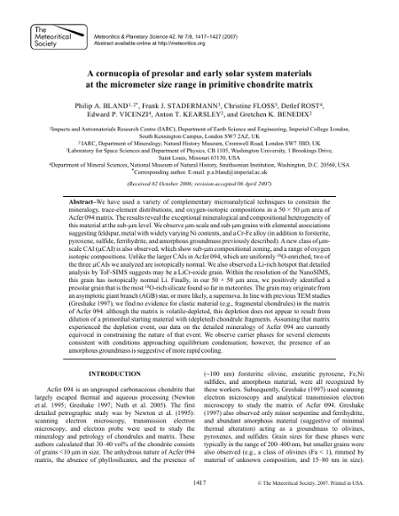 We have used a variety of complementary microanalytical techniques to constrain the mineralogy, trace-element distributions, and oxygen-isotopic compositions in a 50 x 50 micrometer area of Acfer 094 matrix. The results reveal the exceptional mineralogical and compositional heterogeneity of this material at the sub-m level. We observe micrometer-scale and sub-micrometer grains with elemental associations suggesting feldspar, metal with widely varying Ni contents, and a Cr-Fe alloy (in addition to forsterite, pyroxene, sulfide, ferrihydrite, and amorphous groundmass previously described). A new class of micrometer-scale CAI (micro-CAI) is also observed, which show sub-m compositional zoning, and a range of oxygen isotopic compositions. Unlike the larger CAIs in Acfer 094, which are uniformly 16O-enriched, two of the three CAIs we analyzed are isotopically normal. We also observed a Li-rich hotspot that detailed analysis by ToF-SIMS suggests may be a LiCr-oxide grain. Within the resolution of the NanoSIMS, this grain has isotopically normal Li. Finally, in our 50 x 50 micrometer area, we positively identified a presolar grain that is the most 18O-rich silicate found so far in meteorites. The grain may originate from an asymptotic giant branch (AGB) star, or more likely, a supernova. In line with previous TEM studies (Greshake 1997), we find no evidence for clastic material (e.g., fragmental chondrules) in the matrix of Acfer 094: although the matrix is volatile-depleted, this depletion does not appear to result from dilution of a primordial starting material with (depleted) chondrule fragments. Assuming that matrix experienced the depletion event, our data on the detailed mineralogy of Acfer 094 are currently equivocal in constraining the nature of that event. We observe carrier phases for several elements consistent with conditions approaching equilibrium condensation; however, the presence of an amorphous groundmass is suggestive of more rapid cooling.