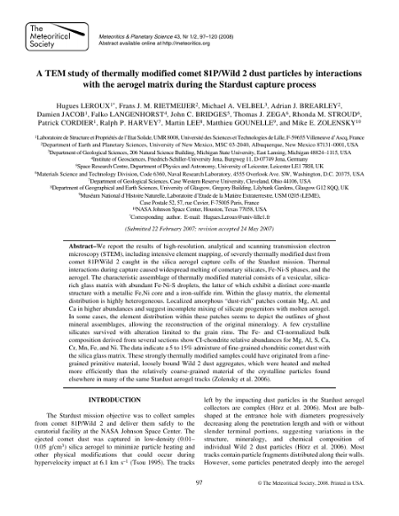 We report the results of high-resolution, analytical and scanning transmission electron microscopy (STEM), including intensive element mapping, of severely thermally modified dust from comet 81P/Wild 2 caught in the silica aerogel capture cells of the Stardust mission. Thermal interactions during capture caused widespread melting of cometary silicates, Fe-Ni-S phases, and the aerogel. The characteristic assemblage of thermally modified material consists of a vesicular, silica-rich glass matrix with abundant Fe-Ni-S droplets, the latter of which exhibit a distinct core-mantle structure with a metallic Fe,Ni core and a iron-sulfide rim. Within the glassy matrix, the elemental distribution is highly heterogeneous. Localized amorphous dust-rich patches contain Mg, Al, and Ca in higher abundances and suggest incomplete mixing of silicate progenitors with molten aerogel. In some cases, the element distribution within these patches seems to depict the outlines of ghost mineral assemblages, allowing the reconstruction of the original mineralogy. A few crystalline silicates survived with alteration limited to the grain rims. The Fe- and CI-normalized bulk composition derived from several sections show CI-chondrite relative abundances for Mg, Al, S, Ca, Cr, Mn, Fe, and Ni. The data indicate a 5 to 15% admixture of fine-grained chondritic comet dust with the silica glass matrix. These strongly thermally modified samples could have originated from a finegrained primitive material, loosely bound Wild 2 dust aggregates, which were heated and melted more efficiently than the relatively coarse-grained material of the crystalline particles found elsewhere in many of the same Stardust aerogel tracks (Zolensky et al. 2006).