Validation of numerical codes for impact and explosion cratering: Impacts on strengthless and metal targets 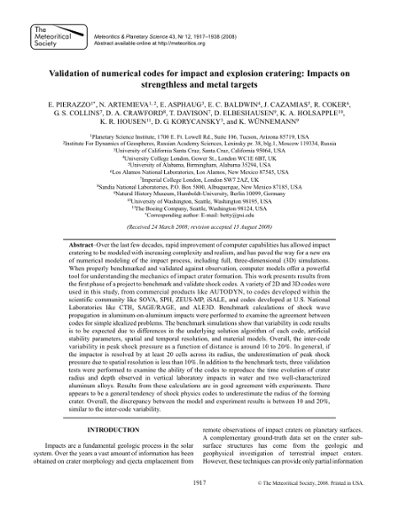 Over the last few decades, rapid improvement of computer capabilities has allowed impact cratering to be modeled with increasing complexity and realism, and has paved the way for a new era of numerical modeling of the impact process, including full, three-dimensional (3D) simulations. When properly benchmarked and validated against observation, computer models offer a powerful tool for understanding the mechanics of impact crater formation. This work presents results from the first phase of a project to benchmark and validate shock codes. A variety of 2D and 3D codes were used in this study, from commercial products like AUTODYN, to codes developed within the scientific community like SOVA, SPH, ZEUS-MP, iSALE, and codes developed at U.S. National Laboratories like CTH, SAGE/RAGE, and ALE3D. Benchmark calculations of shock wave propagation in aluminum-on-aluminum impacts were performed to examine the agreement between codes for simple idealized problems. The benchmark simulations show that variability in code results is to be expected due to differences in the underlying solution algorithm of each code, artificial stability parameters, spatial and temporal resolution, and material models. Overall, the inter-code variability in peak shock pressure as a function of distance is around 10 to 20%. In general, if the impactor is resolved by at least 20 cells across its radius, the underestimation of peak shock pressure due to spatial resolution is less than 10%. In addition to the benchmark tests, three validation tests were performed to examine the ability of the codes to reproduce the time evolution of crater radius and depth observed in vertical laboratory impacts in water and two well-characterized aluminum alloys. Results from these calculations are in good agreement with experiments. There appears to be a general tendency of shock physics codes to underestimate the radius of the forming crater. Overall, the discrepancy between the model and experiment results is between 10 and 20%, similar to the inter-code variability.