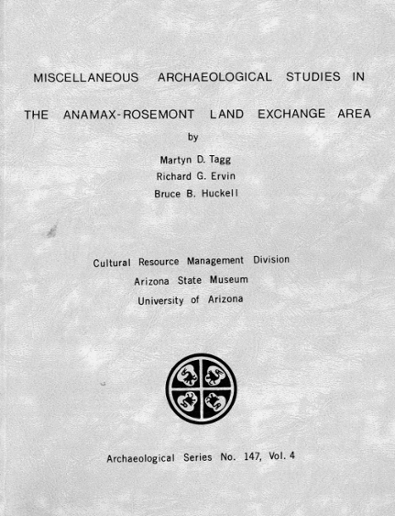 The four studies contained in this volume report the results of work undertaken at a number of different types of sites in the northern Santa Rita Mountains of southeastern Arizona. All these studies were performed within the ANAMAX-Rosemont land exchange area in the Coronado National Forest as part of a 10-month-long mitigation effort conducted by the Arizona State Museum. Chapter 1 presents a description of detailed investigations at lithic material procurement sites in the Rosemont area. Two types of lithic material procurement sites are identified and described, and the kinds of flaked stone artifacts present at these sites are analyzed and discQssed in detail. Evidence suggests that the majority of these sites resulted from the rather casual, nonintensive reduction of cobbles of quartzite and metasediment or, in one case, a relatively intensive utilization of two bedrock outcrops of silicified limestone. While most of the artifacts present at these sites are debitage, cores, and tested pieces, a few finished, retouched artifacts at certain of these sites suggest the possibility that activities other than the reduction of lithic raw materials were also pursued on a limited basis. Chapter 2 describes the investigatJon of two sites in Sycamore Canyon, which is a major drainage system on the west side of the ridgeline of the Santa Rita Mountains, 5 km northwest of Rosemont. Excavation of the two sites produced relatively abundant quantities of artifacts representing occupations ranging from the Middle Archaic period through the Historic period. Detailed comparisons of the flaked stone asemblages from the Sycamore Canyon sites are made with those from the Archaic and Hohokam sites in the Rosemont area, and allow the inference that most of the occupation at the Sycamore Canyon sites occurred during the Archaic period. It is further suggested that both sites were used as temporary campsites for the seasonal exploitation of wild plant and animal resources during prehistoric and early historic times. The third chapter presents data from test excavations carried out at three Sobaipuri of Upper Piman sites located in the Rosemont area. These sites were investigated in 1979, but adjustments to the land exchange boundaries resulted in their ultimate exclusion from the exchange area. The testing serves to document the presence of Sobaipuri residential sites in a montane setting, and indicates that at least two of the three were occupied shortly after Spanish contact. Chapter 4 describes the investigation of a single site located at the western edge of the land exchange area near Helvetia. This site consists of residential structures positioned on artificially constructed rock terraces emplaced on steeply sloping topography. The recovered artifact assemblage suggests a late Rincon or early Tanque Verde phase age for the site. The limited nature of the work done at the site, coupled with an impoverished artifact assemblage, suggests that the site saw use for a short time, possibly seasonally, for an unknown purpose.