Rosemont: The History and Archaeology of Post-1880 Sites in the Rosemont Area, Santa Rita Mountains, Arizona [No. 147, Vol. 3] 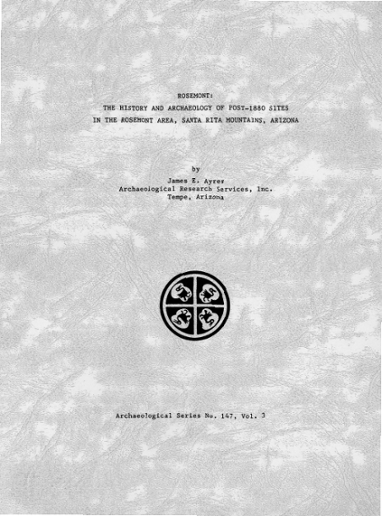 The Rosemont historic sites project was performed by Archaeological Research Services, Inc. for the Arizona State Museum as part of a larger archaeological mitigation program for sites to be impacted by a proposed land exchange between the u.s. Forest Service and the ANAMAX Mining Company. The project area was located on the northeast flank of the Santa Rita Mountains in Pima County. It was situated on the Wasp Canyon, McCleary Canyon and Barrel Canyon washes and their tributaries. The sites were found between 4720 feet to about 5400 feet in elevation. Two sites were located on the west side of the mountains. A total of 30 sites, covering a period of over 100 years, was investigated from early May 1982 to the end of October 1982. The results of the field study are presented in Chapters 4 to 8. Chapter 4 covers the 14 sites identified as mining related sites, including the two communities of Old and New Rosemont. From a historical and an archaeological perspective, the latter two sites were probably the most important of all the sites studied. Chapter 5 reports the results of the study of five ranches. Four of these sites were small operations where the tenants owned none of the land. The VR Ranch was the only one of the five sites that could be considered a ranch in the traditional sense. It is still occupied. Chapter 6 presents the results of the study of the u.s. Forest Service facility near Old Rosemont. The two sites were occupied from about 1904 to about 1937. Chapter 7 discusses the site of the Old Rosemont school and a site believed to have been occupied by at least one of the many school teachers. The final chapter, Chapter 8, presents information on seven sites whose exact functions or purposes are unknown. Some of these sites experienced multiple occupations. Accompanying the archaeological field project was an effort to locate historical records and photographs and to interview knowledgeable individuals, for the purpose of obtaining as much relevant historical information on the 30 sites as practicable. The data from these sources were combined with the archaeological data collected to provide as complete a view as possible of life in mining camps, small ranches, government related sites and other sites in the Rosemont area. This research has resulted in an archaeological study of 30 sites. In a larger sense, it has also contributed to a better understanding of the Mexican sub culture and its role in the development of southern Arizona, of the history of mining and ranching in the Rosemont area and of the economic interaction networks operative through time. It has also provided information on subsistence, on settlement, on the general character of the population and, to a lesser extent, on the technology of the time.