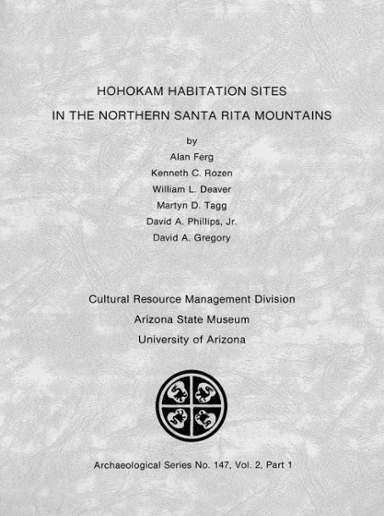 Excavations at 22 ceramic period sites in the Rosemont area of the northern Santa Rita Mountains, Coronado National Forest, are described. Investigations have e~tablished that these sites were occupied by the Tucson Basin Hohokam more or less continuously from approximately A.D. 500 until abandonment of the area at approximately A.D. 1200. The ceramic period prehistory of southeastern Arizona is outlined in the first chapter, and the research design for work at the Rosemont sites is presented in the second chapter. Next each site that received investigation is briefly described, including discussions of the features, artifacts, and length of occupation of each. This is followed by a series of six chapters which present the results of specialized analyses of various classes of material culture. The first of these discusses the pottery from the sites. Detailed definitions and descriptions of the plain, painted, and red ware pottery types are presented, and a model of decorative stylistic development of Tucson Basin painted pottery is introduced. Potential and temporal changes are explored as well; a few temporal trends are noted, but no functional differentiation was identified. The flaked stone artifacts are rigorously described, and both the implements and debitage are subjected to detailed technological, formal, and functional examinations. This study demonstrates that the assemblages display a great deal of consistency in all attributes, and that there is little evidence of technological, formal, or functional variability among the sites. Only projectile point styles exhibit change through time. The ground stone artifacts, divided into utilitarian and nonutilitarian forms, are treated in the next two chapters. A series of formal and functional classes is defined for both, and the various classes are described in detail. Possible functions are discussed, and each class is compared to similar classes from other sites and other areas. It is noted that the Rosemont ground stone artifacts are generally simple, unembellished forms made of local materials, and that the assemblages from all sites are quite similar. Shell artifacts are next described and discussed, and are again found to be relatively simple forms, probably entering the area as finished items. Comparisons show them to be similar to forms known from other Hohokam sites. In the ninth chapter an analysis of the factors influencing settlement location is presented. Variables such as topography, soils, vegetation, elevation, and distance to permanent water are found to have low correlations to site location, but location of sites is highly correlated to stream profile gradient. Comparisons with sites located in similar areas in southeastern Arizona suggest that this variable may have considerable explanatory and predictive power. The last chapter pulls together all available data to examine the nature of the Hohokam occupation of the Rosemont area. Functional site types and intrasite organization are first discussed. Three categories of functional site types (new farmsteads, stable or growing farmsteads, and one site with a ballcourt) are recognized, as is a pattern on intrasite organization which is probably based in part on Hohokam customs and in part on local topography. Economy and subsistence are next examined, and from the meager data available it is proposed that maize agriculture supplemented by hunting and gathering of upland fauna and flora supported the area's inhabitants. Examination of areal and regional relationships indicates principal contacts with the Phoenix Basin Hohokam, the Mogollon, and the Trincheras cultures. Intrusive decorated pottery is the primary evidence for contact, although the presence of a large number of inhumations and certain aspects of architecture provide further documentation of intercultural contact. The nature of the Tucson Basin Hohokam occupation of the area is next traced in terms of site distribution, population distribution, and intersite organization. Possible organization of the Rosemont "local system" is discussed, and reconstructions of temporal trends in settlement and population numbers are presented. Unstable climatic conditions, in conjunction with overexploitation of the local resource base, is suggested to be the ultimate cause of abandonment of the Rosemont area.