Mixed-bloods, Apaches, and Cattle Barons: Documents for a History of the Livestock Economy on the White Mountain Reservation, Arizona [No. 142] 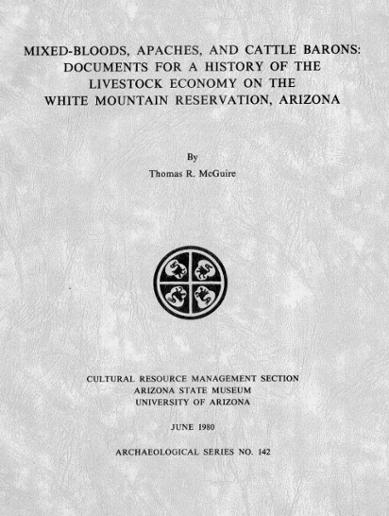 In the late 19th century, Corydon E. Cooley, an Anglo scout for the military at Fort Apache, married two Apache women. Cooley's descendants, primarily the Amos families, accommodated themselves in varying degrees to the customs of Western Apache society and to the authority exerted by officials of the Indian Service. Throughout their long residence on the reservation, these mixed-blood families developed peculiar social and economic positions. They lived apart from established Indian communities, in the remote Corduroy Creek region near the northern boundary of the reservation. They ran cattle on individually assigned ranges, while most Apache were encouraged and induced to join cooperative Indian livestock associations under the superv1s1on of government stockmen. During the early 1950s, these mixed-blood families were excluded from access to reservation ranges at a time when tribal and Bureau of Indian Affairs officials were attempting to strengthen the foundations of the Indian cattle associations and to recover all leased and individually assigned range for Apache use. The history of these families, and of the larger regional society and economy of the first half of the 20th century, is presented, based upon oral testimony, BIA documents, and other archival materials. Comparisons are then made among three distinct types of livestock operations on the reservation: the family-oriented ranches of Cooley's descendants, the tribal cattle associations, and the large-scale cattle and sheep outfits that leased extensive areas of the reservation.