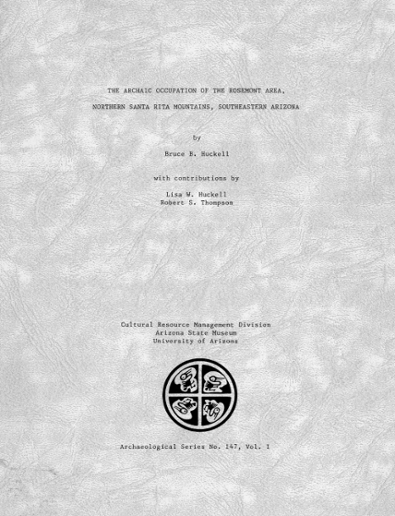 This report describes and discusses data recovery operations at 10 Archaic sites within the ANAMAX-Rosemont land exchange area in the northern Santa Rita Mountains on the Coronado National Forest, south- eastern Arizona. The nature of the post-Paleo-Indian, preceramic occupation of the Southwestern region is briefly discussed, and use of the term "Archaic" to describe this occupation is justified. A general description of the upland or montane environmental setting of the Rosemont area is provided, and a brief discussion of paleoenvironmental conditions is presented. Theoretical foundations for the study of the sites as examples of the use of the area by prehistoric hunting- gathering societies are also stated, as are the principal research problem domains: the cultural and temporal affinities, and the subsistence-settlement systems reflected by the sites. Field methods are discussed, followed by specific descriptions of the results of investigations conducted at each site. The methods by which the artifact assemblages from the sites were analyzed are next presented, and the nature and composition of the artifact assemblage from each site is described in detail. Three periods of occupation: Early(?), Middle, and Late Archaic, are represented in these assemblages. Each of these periods is defined and discussed, and extensive comparisons of the artifact assemblages from the Rosemont sites with those recovered from sites elsewhere in the Southwest and surrounding areas are made. It is proposed that the Rosemont sites show close affinities to those elsewhere in the general Southwestern region, and that continued use of the Cochise culture as a subregional cultural-historical entity is inappropriate. Use of the phrase "Southwestern Archaic" is urged, in recognition of these close interregional relationships. Analysis of specific subsistence activities and settlement patterns represented by the Rosemont sites is undertaken. Statistical analyses of artifact assemblage composition suggest functionally differentiated site classes, correlable in certain instances to settlement location, resource distribution, and perhaps seasonality. Data from sites recorded by survey but not further investigated are added to the information from the 10 investigated sites, and a broader view of subsistence-settlement systems through time and the changing role of the Rosemont area in that framework are proposed. Finally, the value of smaller, open Archaic sites for the study of cultural-temporal and subsistence-settlement phenomena is affirmed, and suggestions for future research on the Southwestern Archaic are made.