Highway Salvage on Arizona State Highway 98: Kayenta Anasazi Sites Between Kaibito and the Klethla Valley [No. 140] 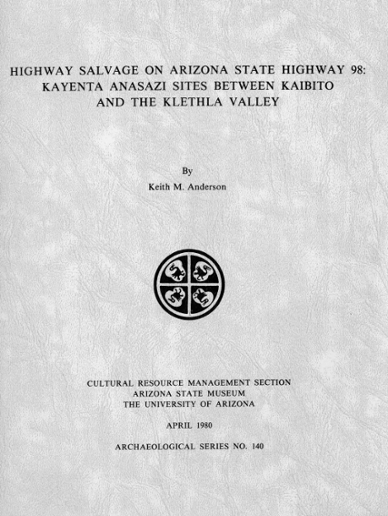 The purpose of this report is to document the results of the · Arizona State Highway 98 salvage project, conducted in 1967. The col- lections and field notes for the present repor~ have traveled with the author of the in the on a circuitous path, until the report was finished. Analysis artifacts has been completed by several people, as recognized acknowledgments. The present report presents the results of part of the salvage excavations in the right-of-way of Navajo Route 22, now State Highway 98, which connects U.S. Highway 160 in the Klethla Valley with Page, Arizona (Figure 1). In 1966, Calvin H. Jennings and Larry E. Powers recorded 21 sites during survey of this corridor. During the following year, eleven of these sites were tested or excavated. From July 10 to August 10, 1967, Jennings supervised the excavation o( six sites within the eastern 17 miles of Highway 98. Between September 18 and October 27, 1967, the author, assisted by Peter J. Pilles, Jr., excavated five more sites in the adjacent 14-mile section of the highway extending west to Kaibito, Arizona. The latter phase of the work is reported here; the report for the eastern portion has not yet been written, although I have included some illustrations of two of the sites excavated by Jennings for com- parative purposes. The information in this report is presented in order to add to the rapidly accumulating data on Kayenta Anasazi settlement. The Highway 98 project is one of several corridor salvage operations con- ducted in this part of the Kayenta region during the last 20 years. These excavations have all taken place in a rather limited area, includ- ing the Klethla Valley (Bliss 1960; Ambler and Olson 1977), the Shonta Plateau (Anderson 1969), and the area west of Klethla Valley included in this report. In the near future, other information for this area will be available in the report of large-scale salvage operations along the Black Mesa to Lake Powell coal-haul railroad corridor. All of these projects are in close proximity to two intensive, long-term projects-- the Long House Valley survey and survey and excavations on Black Mesa-- that have systematically accumulated environmental and cultural data for the study and understanding of Kayenta settlement and climatic change. [excerpt from the Introduction]