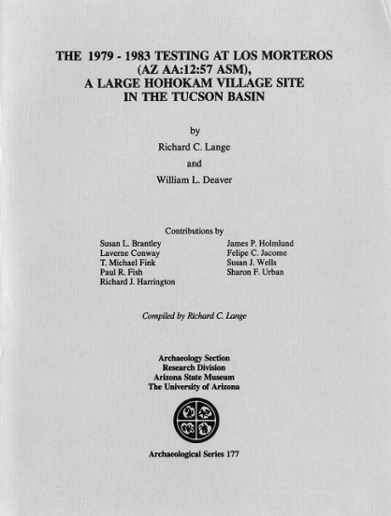 Los Morteros (AZ AA:12:57 [ASM]) is a large Hohokam village site located at the northern end of the Tucson Mountains along the Santa Cruz River. Named for the bedrock mortars located near the center of the site, Los Morteros has a rich and varied history. Several phases of prehistoric occupation are suggested by ceramics representing the Colonial, Sedentary, and Classic periods (A.D. 500 to 1450). The range of features present is considerable, including cremation pits, pit houses, roasting pits, mounds, canals, petroglyphs, hill-side terraces (trincheras), a ballcourt, and the bedrock mortars. Spatially, th~ site covers a large area, but most features are clustered in a limited core area (Fig. 1.1). The area around Los Morteros has also been used during historical times (see Stein 1982). In this report reference to the historical period is limited to those events that bear directly on the site of Los Morteros, in particular the history of archaeological interest in the site. Our major concern is with the prehistoric components at Los Morteros. (excerpt from Introduction)