"They Tried to Bury Us, But They Didn't Know We Were Seeds." "Trataron de Enterrarnos, Pero No Sabían Que Éramos Semillas" - The Mexican American/Raza Studies Political and Legal Struggle: A Content Analysis 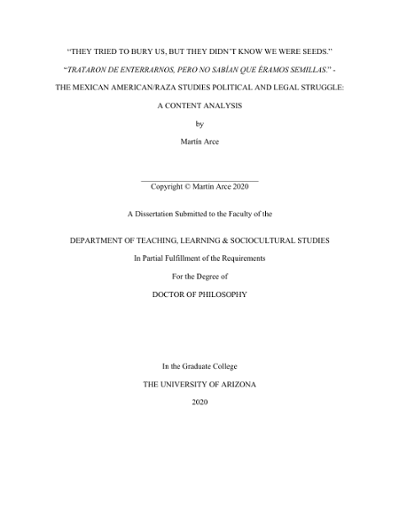 This dissertation presents a qualitative content analysis of the U.S. District Court-District of Arizona Transcripts of Proceedings of Bench Trial (González et al. v. Douglas et al., 2017), the constitutional challenge to Arizona’s anti-Mexican American Studies law A.R.S. §15-112, and the subsequent ruling in the Memorandum of Decision (Tashima, 2017) which found the law was enacted and enforced motivated by racial animus toward Mexican Americans-Chicanx, thus violating their equal protection rights protected by the U.S. Constitution. Through a content analysis of these two data sets (Krippendorff, 2004; Schreier; 2014; Smith, 2000), in direct alignment with the research questions of this study, emerged the three themes of “Race,” “Knowledge,” and “Pedagogy.” Upon further code categorizations (i.e. secondary, tertiary), words, phrases, and entire court testimonials were extracted and assigned to seven coding schemata (i.e., “Race,” “Knowledge,” “Pedagogy,” “Race and Knowledge,” “Race and Pedagogy,” and “Race, Knowledge, and Pedagogy”). Excerpts were then selected for further analysis, based upon how they could directly address the research questions of this study. The theoretical framework to analyze the extracted excerpts from the content analysis methodology are critical race theory (CRT) (Delgado, 2009; Delgado, 2013; Delgado & Stefancic, 2011; Haney-López, 2014; Leonardo, 2002), “Official Knowledge” (Apple, 2014) and decolonizing theories of knowledge(s) (Rodríguez, 2014; Solyom & Brayboy, 2011; Forbes, 1973; Arce, 2016), and critical pedagogy (Acosta, 2007; Freire, 1993). The purpose of this research is to illuminate the weaknesses and cracks in the arguments made by the State of Arizona, claiming that the former K-12 Mexican American Studies (MAS) program: 1) curriculum and pedagogy promoted resentment towards whites, 2) the knowledge(s) taught and produced were not legitimate, and 3) that the components of the critical pedagogy utilized adversely impacted youth from all backgrounds. These illuminations, the findings and results of this research, will not only add to and fill existing gaps within the educational literature on this historically significant and legal precedent setting case for Mexican American-Chicana/o education, but it will also serve as both a political and educational framework for those working to create, implement, and defend effective decolonizing and liberatory education projects for Chicanx youth and other racialized youth of color. Given the history of racism in the United States, with public schools serving as colonial institutions and social reproduction centers of inequality, political and legal attacks on such decolonizing and liberatory education projects are certain to arise. Furthermore, a review of the literature focusing on two bodies of literature is demonstrative of how the MAS legal and political struggle is continuous with the plight and struggle of the history of Mexican American-Chicana/o education and that the former MAS political, ideological, and epistemological foundations as a decolonizing and liberatory education project are identified in the discipline of Chicana/o Studies (Acuña, 2011; Anzaldua, 1987; Muñoz, 2007; Pérez, 1999; Soldatenko, 2009). This temporal contextualization of the review of the literature provides a clear understanding of the MAS political and legal struggle, the focus of this study. The implications of this study include the following: 1) the impact on Mexican American-Chicanx youth engagement and academic achievement (Cabrera, Milem, Jaquette, & Marx, 2014), 2) the imperative for teacher understanding and having foundational knowledge(s) of the discipline of Chicanx Studies/Ethnic Studies (Arce, 2017), 3) Chicanx-Indigenous epistemologies serving as central to the curriculum and pedagogy of Chicanx Studies/Ethnic Studies to effectively address the holistic needs of Mexican American-Chicanx youth (Arce, 2016; Toscano Villanueva, 2013; Zavala, 2018), 4) the Ethnic Studies Now and movement and growth of Chicanx Studies/Ethnic Studies in public schools, and 5) the imperative for urban teacher education programs to adequately prepare prospective teachers to effectively engage Mexican American-Chicanx youth.