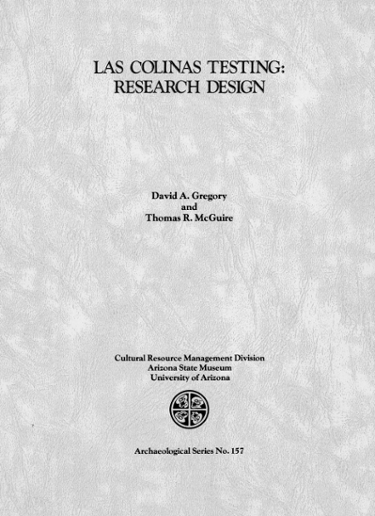 This report deals with the proposed testing of prehistoric and historic archaeological resources within the Interstate 10 (I-10) corridor between Interstate 17 and 30th Drive (Group II, Las Colinas) in Phoenix, Arizona. The historic and prehistoric resources are dealt with in separate sections of the research design. The research design dealing with historic resources documents the search for evidence bearing on the possible existence, character, location, and condition of any subsurface historic remains within the pertinent segment of the I-10 corridor. This research shows that for much of its recorded history the corridor segment area consisted of sparsely settled agricultural land. With the exception of several historic canal segments and a house and associated well, no evidence for the possible existence of undocumented historic resources was discovered. No surface indications of the house and well or the canal segments have been observed during the several surface surveys of the corridor. Because of the scale and accuracy of the maps from which the information was derived, it is impossible to determine precisely the former location of the house and well. Thus it is not possible to derive a specific testing program to deal with these features. Their approximate location has been noted, and the possibility of encountering the remains of the house and well has been considered in conjunction with the testing of the prehistoric resources. The approximate position and alignment of the canal segments may be plotted. It is likely that parts of these segments will be encountered during the testing for prehistoric resources, and this probability has been considered in the context of that testing. No testing specifically directed at these historic canal segments is proposed. The portion of the research design dealing with the prehistoric resources first addresses several preliminary research questions that were employed to guide the background research. Data relating to the original nature and extent of Las Colinas, to the relationship of the site to the I-10 corridor, and to the postoccupational processes that have affected the site are reviewed and discussed. For the purposes of this and subsequent discussions, the corridor is divided into six sub-areas. It is shown that Las Colinas was a large Hohokam site that probably once covered slightly less than 2 square miles. The site once contained numerous features, including several platform mounds, trash mounds, houseblocks, pit houses, borrow pits, cremations, inhumations, and possibly a ballcourt. These features were distributed in a roughly linear fashion along an approximately north-south axis. The site appears to have been occupied primarily during the Classic period (A.D. 1150 to 1450), but there is some evidence for earlier occupations. The I-10 corridor cuts the former extent of the site in an east-west direction, subsuming the feature known as Mound 8 and passing slightly north of the feature designated Mound 7. The principal postoccupational processes that have affected Las Colinas include cultivation of the land and associated activities, and the construction of houses, buildings and roads. Most of the major features at the site had been substantially disturbed or destroyed by 1930. The postoccupational processes occurring within the I-10 corridor mirror those experienced by the site as a whole. All but one of the corridor sub-areas had been brought under cultivation by 1889, and parts of the area were still being farmed through the 1950s and even the 1960s. Several early residences associated with the agricultural use of the area were constructed within or near the corridor, but the development of the bulk of the corridor area for residential purposes did not occur until the 1950s and even the 1960s. Even today, substantial portions of the corridor segment under consideration remain as open lots and fields. A testing program based on the information from the preliminary research is presented. Additional research questions are generated to guide the proposed testing, and these questions are related to several current issues in Hohokam archaeology. The methodology to be employed for the testing is outlined and discussed. The techniques to be used include remote sensing (Subsurface Interface Radar), backhoe trenching, and some hand excavation. The specific combinations of these techniques to be used in each of the corridor sub-areas are presented and discussed. These combinations of techniques are tailored to the existing information for each sub-area and to the managerial and scientific goals of the proposed testing. The kinds of data to be collected and the modes of analysis to be employed in processing those data are presented. A plan of work is included in the Appendix.