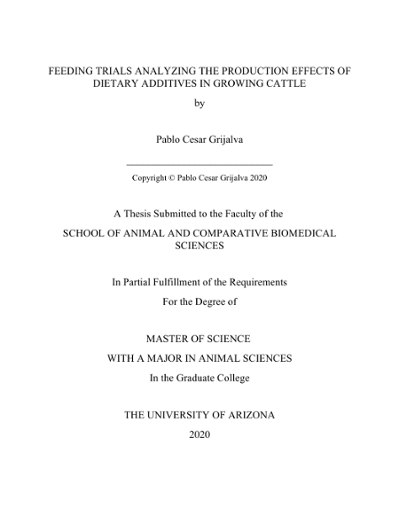 In the first study, thirty-two Hereford x Simmental steers (250.0±15 kg Initial BW) were assigned to four dietary treatments in a completely randomized design (4 steers/pen, 2 pens/treatment) in order to evaluate the effects of supplementing Monensin (MON; Rumensin; Elanco Animal Health, Greenfield, IN) in comparison and in combination (CMB) with a proprietary Probiotic blend (PRO; MultSacch®, Biomart Nutrição Animal Imp. and Exp. Ltda.) on the growth performance, feed efficiency, and on cost of gain. Individual feed intake was monitored using a GrowSafe System (GrowSafe Systems Ltd. Calgary, AB, Canada) and weights were recorded weekly for a 90 d growth data period. Supplementation with PRO and CMB both increased Gain:Feed (G:F) by 6% with respect to control (CON) steers (P = 0.01). No treatment effects were detected in initial body weight (IBW), final body weight (FBW), or average daily gain (ADG) (P > 0.05). DMI was lowest in CMB steers (P = 0.04), and this same group had the lowest cost of gain (P < 0.001). Our findings indicate that when compared with MON, PRO seems to be just as effective in stabilizing intraruminal milieu and increasing ruminal fiber utilization when steers are fed rapidly fermentable carbohydrate grain-based diets, thus improving feed efficiency without the need of MON supplementation. However, combined use of PRO and MON results in the lowest cost of gain (P = 0.03). Further experimentation is required to ascertain the effect substituting MON with different mixtures of probiotics will have long term on cattle growth performance and profitability. The second study consisted in feeding Red Angus steers (n=24; 260 ± 25 kg) in order to analyze the effects of supplementation of zilpaterol hydrochloride (ZH) under heat stress conditions on respiration rate (RR), rectal temperature (RT), growth performance (GP), Biological Impedance Analysis (BIA), carcass traits (CT), and complete blood count (CBC). Steers were randomly assigned to a 2 x 2 factorial treatment arrangement (n=6/group) with factors including heat stress (HS; Temperature Humidity Index (THI) = 73 to 85) or thermal neutral (TN; THI=68) conditions and with/without supplementation of ZH (0 or 8.38 mg/kg/d on 88% DM basis). Steers were provided 9 d to acclimate to tie stalls rooms under TN conditions before starting the study. TN steers were pair-fed to the average daily dry matter intake (DMI) of HS steers. Ad libitum water intake (WI) was recorded daily. HS and TN steers were harvested on d 22 and 23, respectively. By design, DMI did not differ between environment or supplement groups (P>0.31). Initial body weight did not differ between environments or supplement groups (P>0.62). RT, RR, and WI were greater (P<0.01) in HS steers compared to TN steers. There was a supplement by environment interaction (P=0.02) for RT, as HS steers fed ZH had lower RT than HS control steers (39.1 vs 39.5 ℃, respectively). Average Daily Gain (ADG) was 20% higher (P=0.04) in HS steers compared to TN steers. BIA phase angle (PA), resistance (R), and reactance (Rc) values were significantly lower in HS steers by 19%, 8.5%, and 25%, respectively (P ≤ 0.04). CT and CBC did not differ due to environment, treatment, or environment by treatment interactions (P>0.05). Our results suggest that feedlot steers under our experimental conditions display some sensitivity to HS through GP, RR, RT, and BIA; however, this does not translate to a significant impact on CT or CBC. Furthermore, ZH supplementation did not appear to impact animal well-being negatively.