Differential Selection and Schizophrenia Orthologues: The Roles of Life History, Neuroanatomy, and Socioecology 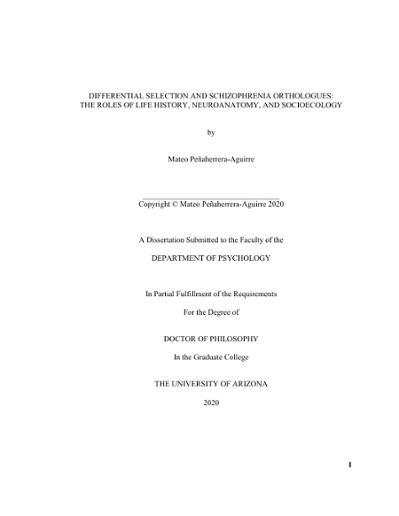 The evolution of major psychopathologies remains a point of intense debate within the scientific community. Counter to classical Darwinian perspectives, these disorders persist in human populations despite their high fitness costs (shorter lifespan and fewer surviving offspring reaching sexual maturity). Schizophrenia, an umbrella term referring to a cluster of positive (delusions, hallucinations, disorganized behaviors) and negative signs (flattened affect, limited motility, anhedonia, asociality, among others), is no exception. Over the past three decades, researchers have developed various theories to address this evolutionary conundrum. Comparative researchers have addressed this subject by investigating numerous empirically based animal models. These investigations have detected potential mechanisms involved in the development of schizophrenia and explored the effectiveness of various interventions aimed towards reducing the pathology’s severity. Even though this approach offers a unique approach to this subject, the current literature could benefit from a comparative phylogenetic perspective. For example, the molecular genetic literature has identified a positive association between life history indicators, such as maximum longevity, with the persistence of ancestral variants of genes (orthologues) across non-human species. Given that slow-life history species are generally subject to weaker selective pressures, this pattern is expected. Hence, deleterious or near deleterious mutations are harder to eliminate. The present dissertation aims to complement the molecular genetic literature by considering the roles of life history, neuroanatomy, and socioecology in this pathology's evolution. The current manuscript describes three comparative phylogenetic studies that outline the evolution of schizophrenia. Study 1 explored the connection between life history and the (dN) ̅⁄(dS) ̅ values (a metric of orthologue persistence) of this pathology. Building on the previous result, Study 2 proposed a comparative phylogenetic examination of schizophrenia, autism, and bipolar disorder orthologues, as a potential complementary avenue for understanding the evolutionary dynamics of comorbidity among these disorders. As predicted, the analyses detected an underlying common genetic factor loading into the orthologue estimates for each disorder. Moreover, a Higher-Order Life History factor exhibited significant positive associations with the (dN) ̅⁄(dS) ̅ values of autism and bipolar disorder. Similarly, this latent variable positively and significantly predicted the Genetic Psychopathology factor. Study 3 explored the connections among substrate use, diet, sociality, life history, neuroanatomy, and their respective relations with the persistence of schizophrenia orthologues in eutherian mammals. The model hypothesized that a Higher-Order Life History factor should positively associate with neuroanatomical indicators such as the species’ total number of neurons. Lastly, the number of neurons predicted the persistence of schizophrenia orthologues. Life history mediated the association between sociality and neuroanatomy. Moreover, the total number of neurons mediated the connection between life history and the estimates for schizophrenia orthologues. The phylogenetic model demonstrated that sociality, a Higher-Order Life History, and the total number of neurons had significant positive associations with schizophrenia ancestral alleles' persistence.